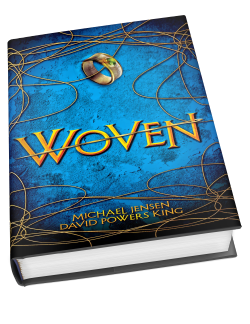 Two unlikely allies must journey across a kingdom in the hopes of thwarting death itself.

All his life, Nels has wanted to be a knight of the kingdom of Avërand. Tall and strong, and with a knack for helping those in need, the people of his sleepy little village have even taken to calling him the Knight of Cobblestown.

But that was before Nels died, murdered outside his home by a mysterious figure.

Now the young hero has awoken as a ghost, invisible to all around him save one person—his only hope for understanding what happened to him—the kingdom’s heir, Princess Tyra. At first the spoiled royal wants nothing to do with Nels, but as the mystery of his death unravels, the two find themselves linked by a secret, and an enemy who could be hiding behind any face.

Nels and Tyra have no choice but to abscond from the castle, charting a hidden world of tangled magic and forlorn phantoms. They must seek out an ancient needle with the power to mend what has been torn, and they have to move fast. Because soon Nels will disappear forever.

Why?  Because, for one, this has the potential to be a rip-roaring adventure with *crosses fingers* delightfully snarky dialogue.  Some of my favorite stories start as unlikely allies teaming up.  There’s just something fun about watching opposing forces/characters being forced to work together and watching those relationships develop.

High fantasy, an epic quest, a snotty princess, and a ghost? I can’t really ask for more in a book now, can I?