Three months after returning Magician Emery Thane’s heart to his body, Ceony Twill is well on her way to becoming a Folder. Unfortunately, not all of Ceony’s thoughts have been focused on paper magic. Though she was promised romance by a fortuity box, Ceony still hasn’t broken the teacher-student barrier with Emery, despite their growing closeness.

When a magician with a penchant for revenge believes that Ceony possesses a secret, he vows to discover it…even if it tears apart the very fabric of their magical world. After a series of attacks target Ceony and catch those she holds most dear in the crossfire, Ceony knows she must find the true limits of her powers…and keep her knowledge from falling into wayward hands.

The delightful sequel to Charlie N. Holmberg’s The Paper Magician, The Glass Magician will charm readers young and old alike.

The first book, The Paper Magician, was so whimsical and unique.  I love Ceony and Emery, and I cannot wait for more of their story! 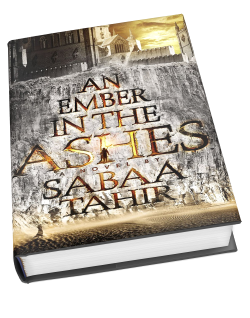 An Ember in the Ashes

Set in a terrifyingly brutal Rome-like world, An Ember in the Ashes is an epic fantasy debut about an orphan fighting for her family and a soldier fighting for his freedom. It’s a story that’s literally burning to be told.

LAIA is a Scholar living under the iron-fisted rule of the Martial Empire. When her brother is arrested for treason, Laia goes undercover as a slave at the empire’s greatest military academy in exchange for assistance from rebel Scholars who claim that they will help to save her brother from execution.

ELIAS is the academy’s finest soldier— and secretly, its most unwilling. Elias is considering deserting the military, but before he can, he’s ordered to participate in a ruthless contest to choose the next Martial emperor.

When Laia and Elias’s paths cross at the academy, they find that their destinies are more intertwined than either could have imagined and that their choices will change the future of the empire itself.

Vow your blood and body to the empire.

Keep your heart for yourself.