Lucy and Owen meet somewhere between the tenth and eleventh floors of a New York City apartment building, on an elevator rendered useless by a citywide blackout. After they’re rescued, they spend a single night together, wandering the darkened streets and marveling at the rare appearance of stars above Manhattan. But once the power is restored, so is reality. Lucy soon moves to Edinburgh with her parents, while Owen heads out west with his father.
Lucy and Owen’s relationship plays out across the globe as they stay in touch through postcards, occasional e-mails, and — finally — a reunion in the city where they first met.A carefully charted map of a long-distance relationship, Jennifer E. Smith’s new novel shows that the center of the world isn’t necessarily a place. It can be a person, too.  (Goodreads summary)

My first exposure to Jennifer E. Smith was The Statistical Probability of Love at First Sight.  I bought it at Barnes and Noble and read the entire thing in one sitting that evening.  It read like a chick flick, it sucked me into the plot, and left me feeling happy and fulfilled.  I loved it and still recommend it to friends as a fun, feel-good book.  Then I read This is What Happy Looks Like which just sort of fell flat for me.  I didn’t really feel compelled to keep reading–though I did love the formatting–and the end was a bit of a letdown.  The Geography of You and Me is somewhere in between.

This novel has all the cute and funny romance of the other novels mentioned above.  Lucy and Owen are adorable and have all the wonder and sparkle of first love.  I adored the depth of each of their back stories, but thought that Lucy’s issues with her parents were a little too simply explained.  Owen’s relationship with his dad was moving and a bit heartbreaking.  Beyond this, they are beautifully written characters who really kept me cheering for them right up until the very last page.  I was moved by their inner turmoil and the growth of their characters throughout the story.  Smith also dealt very honestly with their long-distance romance and the struggle to stay in touch across an ocean.

While the characters were fun and compelling, I found the plot lacking.  Things felt incomplete and a little disappointing.  I kept reading for the characters, but would find my mind wandering and quickly putting the book down to move on to other things.  The ending also left me wondering, “that’s it?” *spoiler* The story felt like it was building to a happily ever after that never appears on page.  However, this didn’t come out of left field as I felt it did in This is What Happy Looks Like.  */spoiler* In my opinion, Lucy and Owen could have used another few chapters and a bit more relationship development.

Overall, The Geography of You and Me was a fun read.  It’s great for the beach or a lazy afternoon, but for me it’s not a favorite. 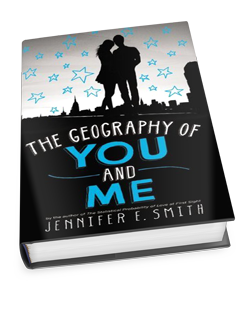