Jubilee Chase and Flynn Cormac should never have met.

Lee is captain of the forces sent to Avon to crush the terraformed planet’s rebellious colonists, but she has her own reasons for hating the insurgents.Rebellion is in Flynn’s blood. Terraforming corporations make their fortune by recruiting colonists to make the inhospitable planets livable, with the promise of a better life for their children. But they never fulfilled their promise on Avon, and decades later, Flynn is leading the rebellion.Desperate for any advantage in a bloody and unrelentingly war, Flynn does the only thing that makes sense when he and Lee cross paths: he returns to base with her as prisoner. But as his fellow rebels prepare to execute this tough-talking girl with nerves of steel, Flynn makes another choice that will change him forever. He and Lee escape the rebel base together, caught between two sides of a senseless war.The stunning second novel in the Starbound trilogy is an unforgettable story of love and forgiveness in a world torn apart by war. (Goodreads summary)

There’s just something about the whole concept of star-crossed lovers that pulls me in.  It’s really why I picked up THESE BROKEN STARS in the first place, and now again with THIS SHATTERED WORLD.  And it’s concept that Amie & Meagan execute wonderfully in their Starbound series.

If it isn’t apparent from the buzz or the blurb, THIS SHATTERED WORLD is a loose retelling of the ROMEO AND JULIET tale. Ironically, I can’t stand the play, but all the same, it’s a story that cannot stop myself from reading retellings of just to see if other authors can pull it off better.

If you were wondering? Yes. Yes, in opinion they do pull this concept off better.

Why? Simplest answer: Jubilee and Flynn are both committed to something greater than themselves.

Fair Avon is where we lay our scene; a planet currently undergoing terraforming. A planet whose terraforming process should be much farther along than it is. Far from being able to sustain the colonists with resources and food, Avon is an endless, murky, ever-changing swampland, with a continuously cloudy sky. A The colonists on Avon, frustrated with the slow progress have grown restless and things have turned ugly between them and TerraDyn. Convinced the corporation is holding out on them, some of the colonists have formed a rebellion, a group called The Fianna. Violence has broken out, with the consequence that some of the colonists’ rights and privileges have been revoked. The situation has escalated to the point that the Galactic Council has stepped in and have started maintaining a military presence on Avon to help keep the resistance in check.

Lee. Jubilee (Lee) Chase is one of the soldiers stationed on Avon, and is already making quite the name for herself with her excellent service record and her rare immunity to the planet’s strange ability to drive off-worlders mad. Childhood trauma has made her somewhat prickly and standoffish, and her conviction has driven her to be the best soldier she can be. She’s quick thinking, resourceful, discerning, intuitive, pragmatic, and displays a strong devotion to duty. Lee is a girl whose life was once torn apart by a rebellion, a girl who’s been molded by her losses, and when she’s taken prisoner by one of the Fianna, she’s forced to face some of those issues and prejudices.

I love Jubilee’s character. She could’ve been a tough nut to crack. Thankfully this book is first-person, dual POV, just like THESE BROKEN STARS, which of course lends more context and insight into why Lee acts the way she does and is the way she is.

Flynn. The other half of that dual POV is Flynn Cormac, a resistance leader in the Fianna who’d much rather pursue a pacifist course of resolution with the soldiers and TerraDyn. Unfortunately those supporting him are gradually becoming a minority, and his opposition who is lobbying for a more aggressive, militant approach is gaining ground. Capturing Lee Chase right off her own base is quite the coup for Flynn. Because, if he plays his cards right, it could win him the renewed confidence of the Fianna, and could hopefully open a peaceful dialogue between the Fianna and the military/TerraDyn.

While I love Lee and her steely resolve, I am more drawn to Flynn’s character, he was just so…endearingly and desperately hopeful. An enduring optimist despite the dismal circumstances. He’s more of a diplomat than a warrior, but he’s capable, fights in his own way, and shares her strong determination and strength of conviction. He wants peace. He wants his people to thrive, to be out from under the thumb of TerraDyn and the soldiers. He wants his planet to thrive, and he has questions as to what is going on with the terraforming process. Most pressing at the moment is this one: Why has TerraDyn built a secret base?

Story. As I said, one of the reasons this ROMEO AND JULIET retelling worked so well for me was because while it is a story about the two star-crossed lovers, both Lee & Flynn are committed to causes and ideas bigger than themselves. And I loved watching their relationship bloom within this framework as they form an uneasy alliance to unravel the mystery of secret bases, the stagnating terraforming project, and the eery madness of that Avon can inflict. And doing all this while trying to prevent an escalated rebellion, traversing the dangerous landscape, alienating and possibly betraying their respective loyalties, facing circumstances that truly test their mettle, and simply trying to survive. It’s a very intense, fast-moving story. And–as probably expected with ties to ROMEO AND JULIET–a bit of a tragic one. And it is fantastic.

Also fantastic? Well, I won’t go into this too in-depth, but while this book focuses on two new protagonists on a new planet, I love the way Amie and Meagan continue the story from the first book, and how they connect it to THESE BROKEN STARS. I’m also excited how the authors concluded this story and am very excited about the possibilities that the third book might hold.

Overall. Wonderfully intense with the right amount of action, adventure, suspense, and romance, THIS SHATTERED WORLD is fantastic addition to the Starbound series. 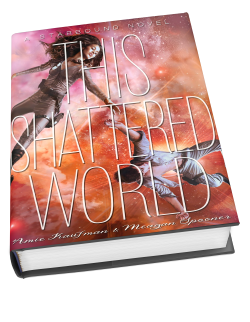