This Night So Dark

The e-short, called This Night So Dark, will be available on all e-reader platforms on October 7, 2014, and it’ll be free for all readers. It’s a bit shorter than novella-length and a bit longer than short-story-length, and it’s both a prequel AND a sequel. How’s that? Read on!The story will follow Tarver, and the secret behind why he was on the Icarus when the great spaceliner met its epic end. Where’d all those medals come from? Why doesn’t he want to talk about it? And if you’re wondering how it can be a sequel at the same time, you just have to look at the format of These Broken Stars. That story’s told out of order, too.In addition to Tarver’s story, the e-short will also contain the first two chapters of This Shattered World, a full two months before the book hits the shelves!

I’m definitely interested in reading more of this universe and learning more of Tarver and Lilac’s story.  Because while These Broken Stars wrapped up in a relatively satisfactory way, their story seemed far from over. 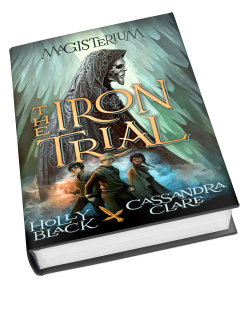 From two bestselling superstars, a dazzling and magical middle-grade collaboration centering on the students of the Magisterium, an academy for those with a propensity toward magic. In this first book, a new student comes to the Magisterium against his will — is it because he is destined to be a powerful magician, or is the truth more twisted than that? It’s a journey that will thrill you, surprise you, and make you wonder about the clear-cut distinction usually made between good and evil.

Typically, I don’t enjoy middle grade books as much as YA. However, everything Cassie Clare writes is like gold so I simply must read this.