Every once in awhile, as I’m sure you know, a book comes along that just makes you want to “Squee!” like the incredibly obsessed fangirl you are.  The Vampire Empire trilogy elicits this type of reaction from me.   It’s an incredibly action-packed, romantic adventure  stuffed to the brim with vampires, airships, and the obligatory pair of goggles any Steampunk tale worth it’s salt must have.

Since Wednesday, Heather and I here at Refracted Light have been holding our own little Rift Walker Kick-Off event to celebrate the much-anticipated release of the second book in this fabulous series.  We’ve gotten the chance to share our reader’s perspective of these books with you, but now you get to hear a little bit about the books from Clay and Susan Griffith, the creators of Vampire Empire!

So who are they?

And without further ado, Heather and my interview with Clay & Susan:

1.  I’m always curious as to how ideas are born, so can you tell us what first inspired Vampire Empire? Was it a character, a scene, an aspect of the world, or something else entirely that planted the story in your minds?

The city of Edinburgh was one of the main inspirations for Vampire Empire. We were married in Greyfriars Kirk, and we spent many days wandering the city’s medieval streets and dark closes (or winding alleys). We could easily imagine a vampire perched on the castle ramparts looking over the city. It creeped us out and thrilled us at the same time.

Dani: I’m a very visual person so I went searching for some photos of Edinburgh and Greyfriars Kirk to share with everyone.  I took a virtual tour of the city, courtesy of Flickr, and I definitely have a better feel for the atmosphere of Greyfriar’s Edinburgh.  What a beautiful city.  Just from the pictures it’s obvious that this is a place of infinite histories, wonderfully creepy legends and beautiful architecture… I can totally understand why you both fell in love with it and why you were inspired by it. 2.  Is there a particular character in Vampire Empire that you each have a soft spot for or that is your favorite to write?

Susan: One of my favorites is Col. Anhalt. The thought of having a friend that loyal and protective is warming. He is a man so devout to his Empire but also to a young woman who he sees almost as a daughter. We would all be so lucky to call a man like that a friend.

Clay: Obviously we both love Adele and Greyfriar. But I think I have a soft spot for Flay. There’s something seductive about a character who is so powerful and vicious, yet prey to her own weaknesses.

3.  The world of Vampire Empire is so rich and complex.  Can you share a little bit about how that world came to exist? Is it something that keeps evolving as the story is written, or did you have a pretty good grasp of how Greyfriar and Adele’s world worked from the beginning?  Are places and locations in the book inspired by your own travels?

We’ve traveled to a number of the settings in the series. We try to bring as much of that into the book as we can to make it more believable. The rest is research. Lots and lots of research. Clay is a historian and we used that skill to build the world. We spent many hours wondering how the world would have changed after the Great Killing in terms of politics and economics and social relations. We developed the areas where our characters travel in some depth, but left much of the rest of the world for the future. We would love to be able to explore the vast world we created even more.

4.  Can you tell us a little bit about your writing and/or planning process for Vampire Empire?  Are you thorough, meticulous planners (AKA – Lord Kelvin) or do you subscribe to a more gung-ho, fly-by-the-seat of your pants approach to writing (AKA – Senator Clark)?  Or do you fall somewhere in between — planning what you can, but having the capacity to improvise and be creative when the need arises (AKA – Greyfriar)?

Lord Kelvin would hate us as we’re more Greyfriar in that we can both improvise well when writing. But in truth, for a collaborative effort to work, the story has to be plotted out extensively before the two of us sit down to write. Otherwise, there would be chaos, with one writer killing off a favorite character that the other writer has saving the day. Kelvin is right in that respect. Order must be maintained so there are no wars between co-authors, like throwing coffee or stabbing something other than the meatloaf. Once the outline is constructed, improvisation and creativity can reign. Some of our best scenes were done on the fly, while others were planned meticulously from the very beginning.

Susan: My biggest inspirations have been the old pulp novels. I loved adventure stories. Maxwell Grant is one of my favorite authors of that era. I grew up on Edgar Rice Burroughs, Madeline Brent, and Elizabeth Peters. One of my favorite books is Sir Arthur Conan Doyle’s The Lost World. The banter in the midst of danger is so sharp and funny. Currently, my favorite author is George Mann. His Newbury and Hobbes series are fantastic, as is his Ghost series in an altered 1920 Manhattan setting.

Clay: I grew up reading pulp adventure too, writers such as Robert E. Howard, H. Rider Haggard, and Sax Rohmer. Over the years, I was drawn to character-based authors such as Raymond Chandler, Graham Greene, and Patrick O’Brian. I’d have to say Stoker’s Dracula may’ve been the most influential book on my entire life, for good or bad.

6.  Have you both always been crafting stories, or was there a significant event or person for each of you that was a catalyst for taking the leap as writers?

Susan: I have always been enthralled by the art of story telling. My mother read me bedtime stories all the time when I was young. But I would never fall asleep. Soon I was camped out in libraries and bookstores. When I couldn’t find the kinds of stories I wanted to read I started writing my own. It’s been non-stop since then.

Clay: There were three main influences that pushed me to being a writer – comic books, old movies, and my father. I grew up reading comics (particularly superheroes), watching any movie I could see (particularly horror movies), and watching my dad, who had been a newspaper man. Of course, he had to get a “real” job to feed his growing family, but he always thought of himself as a newspaper man.

7.  Is writing together ever difficult? How do you maintain such a wonderful consistency in your “voice” throughout the series? How do you work through differing opinions about where you each believe the story should go?

Every collaboration is an effort. The trick is to find the right partner and trust them. It makes the process a bit easier if you understand your partner isn’t changing your work because he doesn’t like you, but because it’s what’s best for the story. The good thing is we have different strengths and weaknesses. Clay is better at world building, guiding the big plot, and villains; while Susan is better at character building, choreographing action sequences, and emotional tension. We play to those things when we are dividing the work. The rest is just constant editing. We pass chapters back and forth constantly, letting the other modify at will. Eventually it is neither one of us, but an entirely new voice.

8.  Do you find your work with comics/graphic novels influences how you write your adult novels? Is it difficult to transition between a more visual media and adult books?

It’s not difficult, but it is different. Graphic novel writing is akin to storyboarding a movie. Perhaps that is why we get comments such as “I can see this like a movie in my head.” When you write a graphic novel you have to condense a story to its bare essentials. You have limited space to get your points across whether because of small word balloons or because you can only get so many panels on a page. You have to move your plot and grow your characters through visuals and a few words. It’s an exercise in finding THE moment.

9.  Do you have any words of wisdom, tips, or advice for aspiring writers?

Never get discouraged. Keep trying. It sounds cliché, but it’s true. Keep writing and submitting. And keep reading. Also, embrace editors, of all sorts. They are wise creatures at times. It’s an unfortunate reality but criticism and rejection are part of a writer’s life. Take it all in and then sit back and sift through all the commentary. Don’t take it personally but try to see it through another set of eyes. Why did they not like it? What can I change that would still be true to the book you want to write? Sometimes you can’t if you want to be true to yourself, and that’s okay too. You just have to accept that. But always move forward.

10.  And lastly, any juicy tidbits or teasers that you can share from Book Three?

Everyone dies! Just kidding. It’s the Great War and no one is safe. There will be heartbreak, but there will also be great joy and some amazing plot twists. Adele and Greyfriar will have to make the hardest decisions so far in the series. We don’t envy them. And someone else may be vying for Gareth’s affections.

Dani:  Ok, that’s seriously NOT funny. <wink>  Although, while it breaks my heart to see my favorite characters hurt or killed off, I do admire when authors choose to make the hard sacrifices for the sake of making their story a stronger one.  As for Gareth’s affections, I believe I know who you’re referring to and she better keep her claws to herself.  He’s spoken for. Can you tell I’m just a little invested in how the romance in this series ends?

Thank you so much Clay & Susan!  It’s always so enlightening to hear authors speak about their work, their process, their inspirations in their own words.  It lends a deeper context to the story and a greater understanding of the motivations behind it.  We really appreciate you both coming on the blog today and sharing with us a little about your amazing Vampire Empire Trilogy!  We simply cannot wait to see what you have in store for us in Book Three!

And because I believe everyone should read and own these books, because they’re so freaking awesome, we’re having a GIVEAWAY!!!  ONE (1) winner will win ONE (1)  set of BOTH The Greyfriar & The Rift Walker!!! 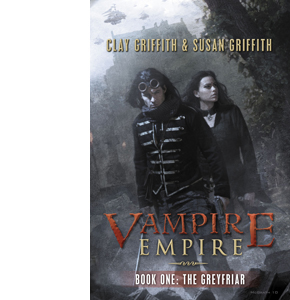 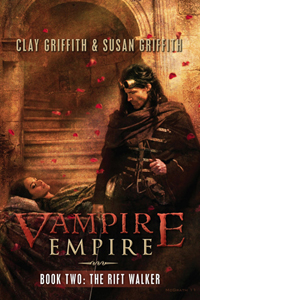