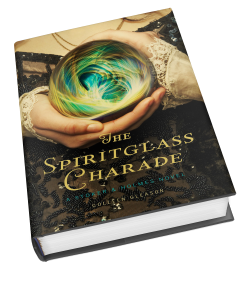 After the Affair of the Clockwork Scarab, Evaline Stoker and Mina Holmes are eager to help Princess Alix with a new case. Seventeen-year-old Willa Aston is obsessed with spiritual mediums, convinced she is speaking with her mother from beyond the grave. What seems like a case of spiritualist fraud quickly devolves into something far more menacing: someone is trying to make Willa “appear lunatic,” using an innocent-looking spiritglass to control her. The list of clues piles up: an unexpected murder, a gang of pickpockets, and the return of vampires to London. But are these events connected? As Uncle Sherlock would say, “there are no coincidences.” It will take all of Mina’s wit and Evaline’s muscle to keep London’s sinister underground at bay.

The world Gleason has built in the Stoker & Holmes novels is just fantastic — alternate history, steampunk, time travel, vampires and mythology combined.  Plus, two great heroines.  I cannot wait to see what adventures are next for Evaline and Mina! 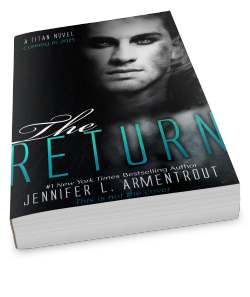 It’s been a year since Seth made the deal with the gods that pledged his life to them. And so far, the jobs they’ve given him have been violent and bloody – which is kind of all right with him. But now Apollo has something else in mind for Seth. He’s got to play protector while keeping his hands and fingers off, and for someone who really has a problem with restraint, this new assignment might be the most challenging yet. Josie has no idea what this crazy hot guy’s deal might be, but it’s a good bet that his arrival means the new life she started after leaving home is about to be thrown into an Olympian-sized blender turned up to “puree”. Either Josie is going insane or a nightmare straight out of an ancient myth is gunning for her.But it might be the unlikely attraction simmering between her and the golden-eyed, secret-keeping Seth that may prove to be the most dangerous thing of all.Book 1 in the new adult paranormal TITAN series, spin-off to the best selling COVENANT series.

It’s no secret that I am a fan of JLA’s Covenant Series, so when she announced a spin-off about Seth, I really needed to know what that was all about. I’m super excited for a chance to “like” Seth.