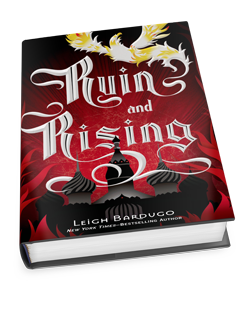 The capital has fallen.The Darkling rules Ravka from his shadow throne.Now the nation’s fate rests with a broken Sun Summoner, a disgraced tracker, and the shattered remnants of a once-great magical army.Deep in an ancient network of tunnels and caverns, a weakened Alina must submit to the dubious protection of the Apparat and the zealots who worship her as a Saint. Yet her plans lie elsewhere, with the hunt for the elusive firebird and the hope that an outlaw prince still survives.Alina will have to forge new alliances and put aside old rivalries as she and Mal race to find the last of Morozova’s amplifiers. But as she begins to unravel the Darkling’s secrets, she reveals a past that will forever alter her understanding of the bond they share and the power she wields. The firebird is the one thing that stands between Ravka and destruction—and claiming it could cost Alina the very future she’s fighting for.

The Saint rattled the bars of her underground cage. This was her war, and she demanded freedom to fight it. The priest refused.

But he’d forgotten that before she’d become a Grisha and a Saint, she’d been a ghost of Keramzin. She and the boy had hoarded secrets as Pelyekin hoarded treasure. They knew how to be thieves and phantoms, how to hide strength as well as mischief.

~ 2%, Ruin and Rising by Leigh Bardugo

“We’ll be entering and area crawling with militias, not to mention the Darkling’s oprichniki. You’re recognizable,” he said to Genya. “So is Tolya, for that matter.” Tamar’s lips twitched. “Would you like to be the one to tell him he can’t come?” Mal considered this. “Maybe we can disguise him as a really big tree.”

“You are not what I expected,” he admitted.

“Not quite the Saint you bargained for?”

“A lesser Saint,” he said. “But perhaps a better queen. I will pray for you, Alina Starkov.”

The strange thing was I believed him.

Nikolai slashed through the bonds on our wrists and yanked me to my feet. “Next time I’ll try getting captured. Just to keep things interesting.”

“You never know,” said Nikolai. “I’ve been busy. I might have some surprises in store for the Darkling yet.”

“Please tell me you plan to dress up as a volcra and jump out of a cake.”