What really happened after the clock struck midnight?Jane Montjoy is tired of being a lady. She’s tired of pretending to live up to the standards of her mother’s noble family-especially now that the family’s wealth is gone and their stately mansion has fallen to ruin. It’s hard enough that she must tend to the animals and find a way to feed her mother and her little sister each day. Jane’s burden only gets worse after her mother returns from a trip to town with a new stepfather and stepsister in tow. Despite the family’s struggle to prepare for the long winter ahead, Jane’s stepfather remains determined to give his beautiful but spoiled child her every desire. When her stepfather suddenly dies, leaving nothing but debts and a bereaved daughter behind, it seems to Jane that her family is destined for eternal unhappiness. But a mysterious boy from the woods and an invitation to a royal ball are certain to change her fate…From the handsome prince to the evil stepsister, nothing is quite as it seems in Tracy Barrett’s stunning retelling of the classic Cinderella tale.  (Goodreads summary)

Perception: That set of circumstances, worldview, experience, education, cultural influences, and social norms that affect how a person see themselves, the world, and his or her situation.  We view everything around us through our own lens.  I find it fascinating that two individuals could witness the exact same event, and though the facts remain relatively the same, the interpretations of those facts and events could differ wildly.  And this is what Barrett does in her recounting of the Cinderella tale as she explores what the story would look like when told from the viewpoint of one of the previously assumed  “wicked/ugly stepsisters.”

Lady Jane Halsey is, in fact, neither wicked nor ugly.  Nor is she rich as one might expect a young lady of noble birth to be.  Her family’s fortune squandered at the gaming tables and her father dead, Jane, her sister and their mother are destitute. However, though their grand home crumbles to dust around them, though they’ve been shunned from their former social circles, though they dress in rags, though they keep no servants and depend on livestock for their livelihood and survival, Jane’s mother cannot seem to acknowledge the severity of their situation.  Therefore, Jane is forced into the role of caretaker, facilitator, and provider for her broken little family. When their mother comes back from one of her trips to town with a wealthy husband and a spoiled stepdaughter/sister in tow, Jane is faced with a whole new set of challenges… and two new mouths to feed. But when her spoiled, new stepsister catches the eye of the kingdom’s young and eligible prince, well, Jane sees the perfect opportunity to be rid of the troublesome girl.

Though the concept of the Cinderella story being turned on its head intrigued me, this book ended up leaving me feeling very middle of the road about it– the pros and cons fell about even.

Character development trumped plot.  While I appreciate the great amount of development Barrett puts into Jane’s character, the result in this case is a very slow moving story.  There is so much day-to-day drudgery continually reinforcing the Halsey’s poverty as their situation becomes ever more dire, and this encompasses most of the book. I kept waiting for something to happen beyond Jane and Co.’s daily struggle for survival.  The plot does speed up near the end, and I liked how the story concluded, but it is a rather long wait for something to… finally happen.  However, I will say, Barrett’s many gorgeous descriptions of life on the Halsey estate, and particularly that of the deteriorating manor house, are vivid and beautifully melancholy.

A twist here, a twist there. Another thing I like about The Stepsister’s Tale is all the little twists to the generally accepted plot points of this fairy tale– the misunderstandings and revisionist history.  Perception, right? Barrett makes some interesting and clever tweaks to this version of Cinderella.

Happily Ever After? Coming into a fairytale of any kind, I generally expect there to be a romantic element, and there is.  However, the care and the detail that Barrett puts into the development of Jane, is somewhat lacking in the romantic relationship.  I understand this is a story more about Jane’s growth, and that’s GREAT, but I was hoping to connect a bit more to Jane’s romance.  In the end, it came across as hurried, stunted and forced.

Overall. A great concept with some interesting twists, but the pacing and romance of The Stepsister’s Tale left a little to be desired. 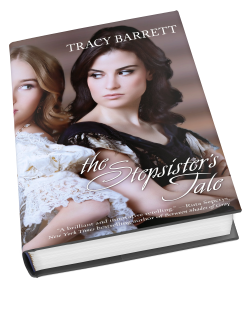