Every sacrifice has consequences.
Sixteen-year-old Rowan has spent most of his life living among the mortals—learning to control the element of fire, impatiently awaiting the day his vengeful mother, Queen Prisma, will abdicate her throne. When he finally returns to Avalon for his coronation, his mother insists he must first prove his loyalty to the court by completing a secret mission: Kill Kalin, the half-human, half-elemental daughter of the air court king. Willing to do anything to remove his mother from power, he agrees to sacrifice the halfling. He returns to the mortal world with his best friend, Marcus, determined to kill the princess. But as he devises a plan, he starts to question whether or not he’s capable of completing such a heinous task. And what price he will pay if he refuses? (Goodreads summary)

I’m totally intrigued by this story.  At first I wasn’t sure I would like this prequel novella.  Another fairy story…I mean come on…been there, done that.  But this is new and fresh. This definitely isn’t your typical fairy story.  It’s more complicated and political than I could have imagined.  I really enjoyed getting a glimpse into this series and an idea of what it is about.

The characters and world are complicated and I really liked that.  There are moral dilemmas and political nuances that add a depth and newness.  I liked that Rowan is a bit of a hothead and that he and Marcus have a unique friendship.  The mystery is left hanging just enough to make you want to jump right into the first novel.  I like that there is foreshadowing for the next part of the series and we get some set up to how the world works ahead of time.

Overall, this was engaging, entertaining, and enlightening.  (How’s that for alliteration?  ;))  I’m very much looking forward to seeing what the rest of the Mortal Enchantment series is about.

– Necessary? Since I haven’t read Mortal Enchantment yet, I can’t say for sure, but it does give you a lot of background knowledge and insight into the world and characters.
– POV?  Rowan
– Where does it fit?  It’s a prequel to Mortal Enchantment
– Prior Knowledge needed?  I didn’t feel like it was necessary 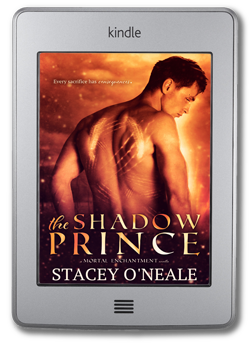