A few months after being honorably discharged from the military, Jackson Hunt is still struggling to adjust back to the real world. He needs to get a job and find a sense of normalcy if he’s going to keep his own demons at bay. The job that falls into his lap, though, is anything but normal. Bodyguard (and baby-sitter) to spoiled-rich-girl Kelsey Summers isn’t exactly what he’d been looking for, but it’s a chance to travel, to get away from the home that has felt stifling ever since his return. It would be a pretty sweet gig if it weren’t for the fact that Kelsey’s father doesn’t want Kelsey to know she’s being followed. Hunt feels guilty (and a little bit creepy) as he watches her from afar. She’s vibrant and infuriating, exciting and reckless, mysterious and familiar. When he sees her falling into the same patterns that he suffered years ago, he decides it’s time to stop watching and help her instead. But getting to know her is more difficult than he thought, especially because the more he knows her, the more he wants her. (Goodreads summary)

I have really enjoyed Cora Carmack’s Losing It series.  It’s gritty and raw and makes you really fall into the lives of her characters.  She doesn’t hold back or shy away from very real and serious issues, and she deals with “life stuff” that happens to actual people in a refreshingly redemptive way.  That said, while I liked Seeking Her, I didn’t love it the way I have the rest of the series.  I felt like the story ended too soon with too much information about Jackson Hunt before he meets Kelsey.  I wanted more of his side of their interactions from Finding It which I feel would’ve made me understand his character better  Just when I was getting into the story and wanting more, the story ended leaving me unsatisfied.

All that being said, this was a good read.  It was interesting and engaging and gave insight into Hunt’s character.  I liked getting to know him a little bit better by being in his head rather than reading about him from Kelsey’s POV.    So, while I like Hunt’s story, I wish there had been more so that I could have LOVED it.

Disclaimer:  There are some strong sexual themes in this book, alcohol use, and other adult themes.  Not recommended for young teens. 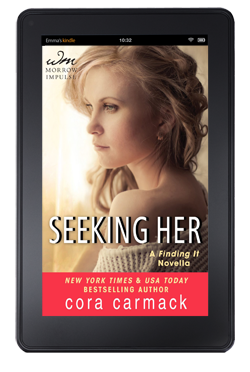