Princess Snow is missing.Her home planet is filled with violence and corruption at the hands of King Matthias and his wife as they attempt to punish her captors. The king will stop at nothing to get his beloved daughter back—but that’s assuming she wants to return at all.Essie has grown used to being cold. Temperatures on the planet Thanda are always sub-zero, and she fills her days with coding and repairs for the seven loyal drones that run the local mines.When a mysterious young man named Dane crash-lands near her home, Essie agrees to help the pilot repair his ship. But soon she realizes that Dane’s arrival was far from accidental, and she’s pulled into the heart of a war she’s risked everything to avoid. With the galaxy’s future—and her own—in jeopardy, Essie must choose who to trust in a fiery fight for survival.

I’m really loving this trend of futuristic/dystopian/sci-fi fairytale retellings, so color me excited about this upcoming re-imagining of Snow White. 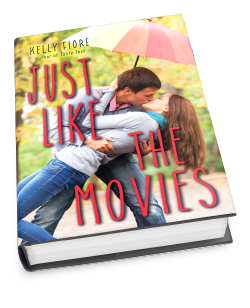 Pretty and popular track star Marijke Monti is confident about almost everything – she’s got great friends, a great family, and she’s on her way to the State Track Championship. In fact, the only thing Marijke isn’t confident about is her relationship with Tommy Lawson. Lily Spencer has spent her entire high school career preparing for the future – she’s participated in every extracurricular activity and volunteer committee she could. But, at home, she watches her mother go on date after date with dud-dudes, still searching for “the one.” Lily realizes that she’s about to graduate and still hasn’t even had a boyfriend. While they live on each other’s periphery at school, Lily and Marijke never seemed to have much in common; but, after a coincidental meeting at the movie theater, Lily gets an idea – why can’t life be like a movie? Why can’t they set up their perfect romantic situations, just in time for their senior prom, using movie techniques?Once the girls come up with the perfect plans, they commit themselves to being secret cohorts and, just like in the movies, drama ensues.

I’m in the mood for cute and this looks like it will fit the bill.  So bring on the cute!