Princess Adele struggles with a life of marriage and obligation as her Equatorian Empire and their American Republic allies stand on the brink of war against the vampire clans of the north. However, the alliance’s horrific strategy for total victory drives Adele to abandon her duty and embark on a desperate quest to keep her nation from staining its hands with genocide. Reunited with her great love, the mysterious adventurer known to the world as the Greyfriar, Adele is pursued by her own people as well as her vengeful husband, senator Clark. With the human alliance in disarray, Prince Cesare, lord of the British vampire clan, seizes the initiative and strikes at the very heart of Equatoria.

As Adele labors to bring order to her world, she learns more about the strange powers she exhibited in the north. Her teacher, Mamoru, leads a secret cabal of geomancers who believe Adele is the one who can touch the vast power of the Earth that surges through ley lines and wells up at the rifts where the lines meet. These energies are the key to defeating the enemy of mankind, and if Princess Adele could ever bring this power under her command, she could be death to vampires. But such a victory will also cost the life of Adele’s beloved Greyfriar.  (Goodreads summary)

** If you have not had the opportunity to read The Greyfriar, the review below may contain information that might be considered “spoilery.” **

Second acts are tricky. They really can be. Typically, I find that second acts are my absolute favorites in a trilogy or my very least. There is no middle ground with middle acts.  But the more I got sucked into The Rift Walker, I became certain that it was going to be just as much a favorite as the first book is. The Griffiths did an incredible job of taking everything I loved about The Greyfriar, doubling it and creating another romantic, adventure masterpiece full of action and intrigue.  As for being the second book in a trilogy, The Rift Walker carefully avoided the tropes middle books can easily fall victim to, and that made it a very refreshing and delightfully surprising read.

I tend to love books that are very character-driven and the Griffiths have filled the world of Vampire Empire with an extensive cast of wonderfully diverse characters. The character development in this series is, simply stated, extremely well done. Even minor supporting characters are thoughtfully fleshed out and authentic. There are no “cardboard cut-outs” to be found here, and that’s a rarity.

Greyfriar is by far my favorite character in the book. A steampunk superhero, complete with head wrap and smoke goggles, he’s dedicated to protecting the human population of the North from the vampire menace that plagues them. He’s selfless, brave, kind, fierce, wise, has a wonderfully dry sense of humor, is heartbreakingly vulnerable at times and is a realistic hero with limitations. He is not superman. He’s just a guy who fights for what he believes in, and the Griffiths do an amazing job of balancing all these elements of his personality to create a wonderfully complex hero that I just fell in love with.

Adele, the main protagonist of Vampire Empire, has really come into her own in The Rift Walker. At the beginning of The Greyfriar, she is little more than an over-protected, somewhat naive teenager who hasn’t been exposed to much of the world outside of her beloved Alexandria. She certainly doesn’t comprehend the extent of the vampire threat. After her capture by Prince Cesare of Britain, and her subsequent rescue and flight to safety with Greyfriar, she has a much better understanding of what the situation is like in the northern territories for the humans who live there. The experience in the North has matured her, the maneuverings at court have forced her to claim her birthright. These combined experiences have given her a better understanding of what becoming Empress means in this tenuous political climate and have forever shaped her convictions. Throughout the second book, Adele transforms into this regal, authoritative, headstrong, witty young woman who’s committed to protecting her people.  She is a marvelous character who I’ve enjoyed watching evolve over the course of this series.

Another thing I enjoy watching evolve is the romance between Adele and Greyfriar. I’ll admit that I’m a sucker for a good romance, and their love is just so beautiful. Built on a mutual respect for one another, shared values, true friendship, and unwavering trust it’s one of the most meaningful and deep relationships I’ve read in a very long time.  It’s interesting to watch their romance unfold especially in the face of Adele’s duty to create an alliance with the American territories by marrying Senator Clark.

Speaking of the good Senator, if I had one complaint about The Greyfriar, it was that Senator Clark felt a little one dimensional; a caricaturization of your stereotypical brash American. If Buffalo Bill Cody and General George Armstrong Custer had a love child… Senator Clark would be it. I never felt that Senator Clark had a whole lot of credibility in The Greyfriar. He seemed more bluster than action; kind of this larger-than-life, over-zealous buffoon. However, I feel in The Rift Walker, he is given more time to shine, and the reader is given the chance to know the man a little better. He truly is formidable and courageous, unyielding and pragmatic and though I can’t say that I like Clark as a character, he’s definitely a more interesting foil in this book. Cesare was another character I wished had been developed a little bit more in The Greyfriar, but as with Senator Clark, I found Cesare’s character to be more well-defined in this book. The extent of his cruelty, in addition to his strategic savvy and viciousness, gave me a broader view of what Cesare is capable of and just how far he is willing to go to achieve his goals. While always a serious threat, I found him to be a much more dangerous and devious enemy in this second book.

One of the things I love about this series is the issue of morality. No one in this world is clearly black and white, everyone has shades of gray and that includes Adele and Greyfriar. Characters do things that cross the line — sometimes horrible things — to preserve and protect the greater good, the people they love and/or their own interests. There are many characters in this book who are very politically motivated; everyone has an agenda that they would like to see fulfilled. It just makes for a very interesting story as loyalties are questioned, horrific events unfold and people’s lives are forever changed as characters act all in the pursuit of seeing their individual plans come to fruition. In this same “shades of gray” vein, I was actually surprised to find myself feeling small twinges of sadness for the vampires every once in awhile.  Why? Because generalizations are often overly-simplistic viewpoints and things aren’t always so black and white in the tumultuous world of Vampire Empire.

And what a world it is. The world of Adele and Greyfriar is recognizable as our own but set in an alternate history in the year 2020. Most of the technological advancements we readers enjoy have not been developed as scientific discovery took a backseat to humanity’s survival once the vampires made their existence public knowledge. That’s not to say Adele’s Equatorian Empire doesn’t have it’s technological wonders, but they mostly run on steam. Most, if not all, of the locations the Griffiths use in their series actually exist, and I found their casual and natural inclusion lent a certain credibility to the series — more of a connection. It’s our world, and yet it isn’t. So similar, and yet so different. One thing I really appreciate about the series is that the Griffiths make good use of the fabulous and intricate universe they’ve created. The authors don’t just describe places to the readers they take you there. The story never stays in one place for long as the characters are constantly on the move and it just gives me, the reader, a feel for the wonderful and broad scope of this world.

Now, I know that up to this point I haven’t discussed much of the story itself, mainly because I don’t want to ruin all the brilliant little twists and turns. I will say that the plot was well-executed, the prose is lovely, the dialogue is intelligent and witty, and the story itself is very tight and very fast-paced . When I had to step away from this book because of the daily demands of life I could not wait to jump back into it. It’s definitely a page turner.

Overall, The Rift Walker is a wonderful continuation to the Vampire Empire Trilogy. Full of heart-pounding romance, political intrigue and swashbuckling adventure it’s a non-stop, thrilling ride right to the very end.  I loved it possibly even more than The Greyfriar and I cannot wait to see where the Griffiths take us in the third and final book.

Check in tomorrow for an interview with Clay & Susan and a giveaway!  One lucky winner will be the recipient of both The Greyfriar and The Rift Walker!!! 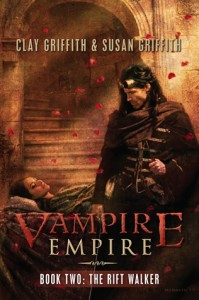 Source: ARC for review provided by the publisher