Love and Other Unknown Variables

Charlie Hanson has a clear vision of his future. A senior at Brighton School of Mathematics and Science, he knows he’ll graduate, go to MIT, and inevitably discover the solutions to the universe’s greatest unanswerable problems. He’s that smart.The future has never seemed very kind to Charlotte Finch, so she’s counting on the present. She would rather sketch with charcoal pencils, sing in her pitch-perfect voice, or read her favorite book than fill out a college application.Charlie’s future blurs the moment he meets Charlotte. She’s not impressed by the strange boy until she learns he’s a student at Brighton where her sister has just taken a job. At Charlotte’s request, Charlie orchestrates the biggest prank campaign in Brighton history. But by the time Charlie learns Charlotte is ill and that the pranks were a way to distract her sister from Charlotte’s illness, Charlotte’s gravitational pull on him is too great to overcome. Soon he must choose between the familiar formulas he’s always relied on or the girl he’s falling for (at far more than 32 feet per second).

The ultimate left brain guy falls for the mischievous right brain girl. This sounds like it could be equal measures cute, geeky, and heartbreaking… and I cannot wait to read it. 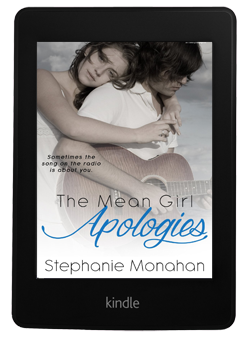 You know that catchy song you keep hearing on the radio? It’s about you.Natalie Jamison has spent five years trying to forget the girl she was in high school: popular, pretty…and, okay, mean. Now in her twenties and living once again in her small town, she’s right back where she was: following Queen Bee Amber and keeping secrets from her best friend, Sarah.Secrets like Jack Moreland.Everyone knows Jack Moreland—his new album, Good Enough, is everywhere. He’s famous. Impossibly handsome. Completely untouchable. But what none of Natalie’s old clique knows is that in high school, Natalie and Jack fell in love. And their secret relationship was incredible, painful—and earth-shattering enough to inspire an entire album.Facing friends and enemies isn’t easy, but Natalie will go to great lengths to prove she is good enough—to her friends, to herself, and most of all, to the small-town boy turned worldwide heartthrob she never forgot.

Maybe it’s because of Taylor Swift and her very public “this song’s about you” phase lately, but there are so many times when I wonder who songs were written about. This book speaks to me on so many levels, from the former “mean girl” who never really liked being a mean girl in the first place to the lost love between secret high school sweethearts. Looking forward to this one for sure!

* Dani’s 2¢: “This one looks like it could have a Persuasion vibe to it that makes me super excited about it.”