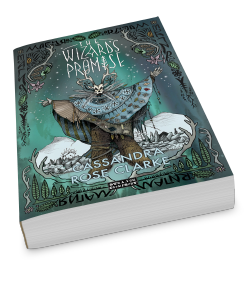 Blurb: All Hanna Euli wants is to become a proper witch – but unfortunately, she’s stuck as an apprentice to a grumpy fisherman. When their boat gets caught up…  Read more

Warning… this review is MOST DEFINITELY longer than 7 sentences.  Brevity is a skill I have yet to master.  Clearly.

Taking place at least two decades after the Assassin’s Curse duology concludes, Clarke reintroduces her fascinating, vast magical world once again through the eyes of Hanna Euli, The daughter of a Kjoran fisherman and of a former pirate who sailed under the infamous Ananna, the pirate queen who just happens to be her namesake.  Unfortunately for this Ananna, who’s grown up on stories of daring escapades and legendary feats of danger and adventure, her life is… not so interesting.  But she wishes it were.  All Hanna wants to do is study and hone her wind magic so she can become a witch, but apprenticed to a fisherman, her dreams seem always just out of reach, her abilities only useful to fill the sails on a fishing boat and to cast simple preservation spells on their daily catch.

Until… a routine fishing trip takes a slightly sinister turn. And all at once, Hanna finds herself deceived, kept in the dark, in danger, and far from home on a quest she wants no part in.  Unfortunately for Hanna (and fortunately for us readers), as much as she tries to distance herself from the circumstances and people that stole her away from Kjora, certain forces aren’t as interested in leaving her alone.

While The Wizard’s Promise lacks the sense of high, rollicking adventure that I loved about the previous duology, it was still wonderfully entertaining to watch Hanna grow into herself (and, to some extent, even into her name).  Which is possibly my favorite part of Clarke’s stories thus far: her wildly independent, capable, and authentically flawed heroines.  Hanna is hot-headed and a bit short-tempered, she’s a little selfish, immature and EXTREMELY stubborn… and I love it. She’s real, warts and all.  And being far from anything familiar results in Hanna being forced into situations and decisions that push her character and help her learn things about herself and her abilities, both magical and non-magical.  Realizations and growth that’ll be critically important for what comes next in her story.

And really, all the character were wonderful.  Isolfr, Frida, Kolur, Asbera, Finnur, these characters in particular, are all so vibrantly rendered and have such a unique life of their own.  I look forward to discovering what’s next for them as well.

My other favorite part of this book (as well as in the previous duology) is Hanna’s world.  It feels enormous.  It has history and depth.  It’s beautiful, wild, dangerous, dark and bewitching (sometimes in the literal sense) and it’s filled with all kinds of creatures, mystery, and magic.  Magic infuses the very core of this world, and it’s magic of all kinds; from elemental magic, to localized magic of geographic regions, to the magic of other planes of existence.  It’s unpredictable, but also follows rules and has consequences if used incorrectly or too much.  It’s both a help and a hindrance.  And it is JUST. SO. INTERESTING.

But while I loved the characters and development aspect of The Wizard’s Promise, the story fell into a bit of a rut for what felt like quite a long while.  I kept waiting for the story to take off and finally get rolling, and it did… toward the end.  To the effect that the book as a whole had a “laying the groundwork” kind of vibe, instead of simultaneously building that foundation while also moving the story forward.  I found that to be a bit disappointing.  But as I said, what it lacked in driving forward momentum, it made up for in character development and world building.

Overall, Cassandra Rose Clarke can certainly spin an entertaining yarn, and now that groundwork has been sufficiently and thoroughly laid, I have high hopes for some of that much-anticipated “high, rollicking adventure” in The Nobleman’s Revenge. 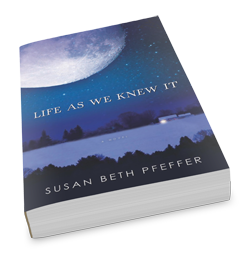 Blurb: Miranda’s disbelief turns to fear in a split second when a meteor knocks the moon closer to the earth. How should her family prepare for the future when worldwide tsunamis wipe out…  Read more

This semester I took an astronomy course to fulfill a requirement for my teaching license and because, well, I love science. One of the requirements for this course was a 3-5 page paper, preferably research oriented and somehow related to astronomy. I picked a “research” paper on sci-fi lit analyzing whether the astronomy was correct or not, because that doesn’t sound fun at all. Yeah, I’m sneaky like that. 😉 Life as We Knew It is one of the books I chose for my paper.

As far as books go, Life as We Knew It fell flat for me. The characters were hard to relate to, and the plot dragged a lot after a while. It is written from the perspective of a teenage girl’s journal, and typically, I would enjoy this. However, the execution and writing style were very one-dimensional and rather flat.

The astronomy, on the other hand, was absolutely spot on. The premise of the book is that an asteroid crashes into the Moon and moves it into a closer orbit around the Earth. The effect this has on the Earth is extraordinary. The tides become larger and more violent, swallowing place like New York City and Miami and Los Angeles. Volcanoes begin to erupt, even in places that have not had an eruption for thousands of years. This caused massive amounts of ash to cloud the atmosphere causing the temperature to drop immensely. The seasons were therefore disrupted. Weather patterns changed because of the increased gravitational pull of the Moon. Even animals were acting differently.

Overall, while this book was interesting astronomically speaking, it was not the most engaging read, in my opinion. I enjoyed thinking through the ramifications of an asteroid event like this, but the delivery took away from enjoying the book completely.