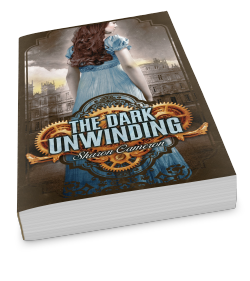 When Katharine Tulman’s inheritance is called into question by the rumor that her eccentric uncle is squandering away the family fortune, she is sent to his estate to have him committed to an asylum. But instead of a lunatic, Katharine discovers a genius inventor with his own set of rules, who employs a village of nine hundred people rescued from the workhouses of London.Katharine is now torn between protecting her own inheritance and preserving the peculiar community she grows to care for deeply. And her choices are made even more complicated by a handsome apprentice, a secretive student, and fears for her own sanity.As the mysteries of the estate begin to unravel, it is clear that not only is her uncle’s world at stake, but also the state of England as Katharine knows it.

Laughter slithered along the walls, but I could not move or look away. I could not feel the floor beneath my feet. The parson’s cracked gaze glittered black into mine as I stood there, heart beating in my ears and throat, suffocating from lack of breath, unable to break the spell of my stare. And then, very slowly, the eyelids came down, and the glass eyes blinked.

~25%, The Dark Unwinding by Sharon Cameron

A few months after being honorably discharged from the military, Jackson Hunt is still struggling to adjust back to the real world. He needs to get a job and find a sense of normalcy if he’s going to keep his own demons at bay. The job that falls into his lap, though, is anything but normal. Bodyguard (and baby-sitter) to spoiled-rich-girl Kelsey Summers isn’t exactly what he’d been looking for, but it’s a chance to travel, to get away from the home that has felt stifling ever since his return. It would be a pretty sweet gig if it weren’t for the fact that Kelsey’s father doesn’t want Kelsey to know she’s being followed. Hunt feels guilty (and a little bit creepy) as he watches her from afar. She’s vibrant and infuriating, exciting and reckless, mysterious and familiar. When he sees her falling into the same patterns that he suffered years ago, he decides it’s time to stop watching and help her instead. But getting to know her is more difficult than he thought, especially because the more he knows her, the more he wants her.

From now on, I would watch her when I could.

Find her when I’d lost her.

Protect her when she needed me.

That was it.  Nothing else.