InIn this timeless new trilogy about love and sacrifice, a princess must find her place in a reborn world.

In a society steeped in tradition, Princess Lia’s life follows a preordained course. As First Daughter, she is expected to have the revered gift of sight—but she doesn’t—and she knows her parents are perpetrating a sham when they arrange her marriage to secure an alliance with a neighboring kingdom—to a prince she has never met.

InOn the morning of her wedding, Lia flees to a distant village. She settles into a new life, hopeful when two mysterious and handsome strangers arrive—and unaware that one is the jilted prince and the other an assasin sent to kill her. Deception abounds, and Lia finds herself on the brink of unlocking perilous secrets—even as she finds herself falling in love.  (Goodreads summary)

Having greatly enjoyed Pearson’s The Adoration of Jenna Fox, I was delighted to learn that she was branching out into the fantasy genre.  And the result?  Well, color me thoroughly intrigued… and greatly anticipating the next book.  And that ending?!  Oh.  Nicely played Mary E. Pearson. Nicely played. *slow claps*

Lia.  Oh, I like this girl.  Fiery and intelligent, outspoken and independent, defiant and resolute with a slight imperiousness, Lia is not about to let herself be forced into an arranged marriage.  And so she bolts — runs away from duty, marriage, family, and legacy — to start over in the port town of Terravin as a barmaid.  No, it’s not as fancy as her previous life as a princess, but she’s free to make her own choices.  And I love that about her, that she had the courage to leave everything she ever knew behind, to leave behind luxury and security, to leave behind what some would perceive as her duty and what she perceives as imprisonment and a farce.  She knows her own mind and won’t be cowed by anyone. Lia’s just a delightfully strong character who is forced to grow up quite a bit in this novel — being faced with circumstances and consequences set in motion by her flight, dealing with tragedy, becoming more self-aware, learning more about what it means to be a first daughter, and recognizing her own misconceptions and misjudgments — and I loved the journey that Pearson took her on.

Rafe & Kaden.  When two strangers appear at the door of her inn, Lia has no idea that they both know exactly who she is, and that they are both looking for her.  And that they both have their own (possibly nefarious) purposes for seeking her out.  One’s an assassin, the other the prince she left at the altar.  I don’t want to say too much about these two.  It’s best if you’re left to discover more about them on your own, but I will say, “Many, many props to Mary E. Pearson on these two characters.”

And yes, there are two guys, which might have some of you going, “Great.  A love triangle.”  Ehhhhh… actually not really. I wouldn’t consider it to be one.

So, now that we’ve broached the subject of romance, let’s talk about it a bit more, shall we?

Romance.  While I eventually ended up liking what developed in the romance department, the beginning was a tad rocky.  WIthout going into too much detail, the romance angle began a bit too abruptly for me.  Once it got rolling, I was on board waving my ticket like a madwoman.  But I was running to catch that train in the beginning.

But even so, though I ended up invested in the romance, the book was a bit more romance-heavy in the first half than I would’ve preferred.

Story and World.  And here’s why.  There’s SO MUCH that’s happening in the fringes — world, politics, history, religion, magic, maneuverings, agendas, prejudices — so much that doesn’t get as much page time as I would’ve hoped due to so much of the focus being on the development of characters and their various relationships.  And so  in the first half of the book, there was a sense of the  larger story being put on slo-mo while that development was going on.  I much prefer when all these things develop in tandem, but that’s not so much what happens in The Kiss of Deception.  At least not so much in the first half.  Once *spoilery things* happen, the plot does get its momentum back, and some of those things I mentioned above (world, politics, etc.) do get more exploration. And really, it’s an interesting foundation that Pearson’s building here —  a tantalizing glimpse of a rich, complicated, magical world that has a lot of unexplored depth. I think it will get explored, I just need to be more patient. *sheepish shrug* Because from the way things end up playing out in the second half and now that considerable time has been spent on the development of characters and relationships, Pearson now has a fantastic launching board for Book #2.  And I have no doubt that many answers to my various questions (and Lia’s) will be addressed in some way, shape, or form.

Overall.  A promising and intriguing addition to YA fantasy that holds possible favorite series potential. 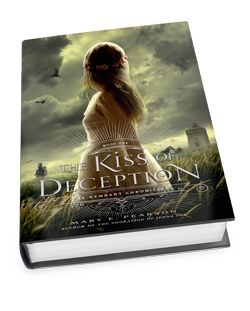