Teen celebrity Vivian Divine has had a rough six months—her movie-star mother was murdered, and her boyfriend cheated on her with her best friend. Through it all, she’s had to smile for the camera—this is the stuff the tabloids live for, after all.

When a death threat arrives with her fan mail, Vivian decides to run to Mexico, hoping to escape whoever it is who wants her dead. There, she finds an ally in the mysterious and charming Nick, but even he seems like he can’t be trusted. As Vivian travels deeper into Mexico, she finds herself asking a horrifying question: If she can’t hide from the paparazzi, what makes her think she can elude a madman?

Filled with surprising twists, poignant moments, and the snark of a Hollywood starlet suddenly on her own, Vivian Divine Is Dead brings a fresh new voice to contemporary fiction.  (Amazon summary)

I’m not sure where I got the idea that Vivian Divine is Dead was a dark comedy. An early blurb maybe? The dark, yet whimsical cover? I don’t know. But once beginning, it quickly became clear that this was a gross misperception on my part. Dark? Oh, definitely. Funny? Not in the slightest. But expectations aside, while not terribly complex or airtight, it nonetheless proved to be a gripping fast-paced mystery which results in Vivian’s continued, frantic escape for her life, set against the fantastic and colorful backdrop of rural Mexico and Día de Muertos. Combining all of these elements, Sabel successfully weaves throughout her book a vivid and pervasive sense of urgency, danger, suspense and utter “wrongness” that kept me flipping pages, and had me finishing this book within a matter of hours.

I think the allure of this book, though, is found mostly in Vivian’s character. For being a Hollywood darling, she is surprisingly grounded and real. On the run for her life in rural Mexico, she’s definitely out of her element. This, plus her grief over the loss of her mother, is raw and easy to sympathize with, and made Vivian a very relatable character despite her extraordinary circumstances. However, that said, there are certain themes that Sabel tries to develop in Vivian’s character over the course of the book that, when all is said and done, weren’t achieved quite as effectively as they should or could have been. And despite the fact that I devoured this novel, the ineffective character development, an insta-lovey type romance, the sometimes flimsiness of the mystery, and the bleak feeling I was left with ultimately colored my final thoughts on the book.

Overall, Vivian Divine is Dead is one of those odd reads where despite the fact that it was a page-turner, it just wasn’t quite for me. 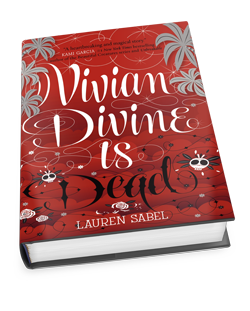