Ingrid and Gabby Waverly moved to France expecting a quiet reprieve from London gossip, but the truth they face in their new home has a sharper–and deadlier–sting.

Paris is plagued by an underworld of demons and gargoyles who all seem to want something from the Waverly girls. Saving Ingrid’s twin, Grayson, from the fallen angel Axia nearly killed them. And they’re still being hunted–only this time, demons aren’t their only predators.

Ingrid’s blood is special: it bestows the power to command gargoyles. It’s an ability no other human has, and in the wrong hands, it could be used to send her cursed guardian, Luc, and his fellow Dispossessed to extinction. There are those who will do anything to get Ingrid’s blood–and they see no value in human life.

The Alliance has vowed to protect the Waverlys, and a new gargoyle has been assigned to guard their abbey home alongside Luc. But no one can watch over Ingrid, Gabby, and Grayson all the time–which means the three must learn to fight for themselves.

Because darkness follows the Waverlys. And sometimes darkness comes in the form you trust the most.  (Amazon summary)

*** If you have not read the first book in this series, The Beautiful and the Cursed, this review will contain spoilers.***

You know that happy thrill, that adrenaline rush, that runs straight from your head to your toes after the roller coaster ride has ended and you’re coasting back to the platform? That intense and jittery excitement that comes from the mashed up feelings of danger, terror, joy, delight and anticipation?  That.  That’s what I felt upon finishing The Lovely and the Lost.  From beginning to end, it is one heck of a thrill ride, and just fun… if “fun” is the right description for a book filled with so many things that go oh-so-wrong for so many characters I’m emotionally invested in.

While not usually a fan of stories/series with multiple third person narrators, this book (and series) is an exception.  Morgan uses her storytellers and their different perspectives extremely well; running different threads parallel to each other, always keeping the larger story, the action, and the mystery moving forward at a breakneck pace.  There were a few times when the transition from narrator to narrator was a bit jarring, but on the whole, the different perspectives effectively, skillfully, and continually serve to evolve the mounting tension and suspense.   And oh, is there ever tension and suspense.

At the end of The Beautiful and the Cursed, we were left with both hope and heartbreak as Gabby & Ingrid got their brother back, but for a price.  Also, Luc was being threatened by the Order, The Alliance was dealt a blow, Gabby was horribly disfigured, Grayson was… having hellhound issues, and the mysterious Mssr. Constantine apparently knows more than he’s been letting on about the workings of this supernatural world.  Oh, and this is a big one: though she’s been dealt with for the time being, evil-angel Axia is not dead, and she wants her blood back.  Since the current repository for Axia’s blood happens to be our beloved Lady Ingrid, the reader can expect conflict to abound.  And abound it does, because not only does Ingrid have the blood of an angel running through her veins, but also that of a human and a demon, making her blood both extremely one-of-a-kind and extremely valuable.  Unfortunately for Ingrid, Axia’s not the only one who knows how special her blood is, and soon finds herself pursued by those who’d take it from her. <cue much excitement, danger, creepiness, and Luc gargoyling out>

Also, adding some great conflict? Some Daddy issues.  Two fathers show up in The Lovely and the Lost, and let’s just say their presence stirs the pot just a little more.  Because, you know, it needs more stirring.  *rubs hands together greedily* Also, Page gives us an unwanted partner of questionable motives; a crushing rejection that goads someone into acting a bit recklessly; a star-crossed romance and a growing jealousy; tough questions of identity, self-worth, and purpose.  Oh, and the political/diplomatic relationships between the supernatural groups gets a bit more complicated… and more interesting.  All of this and so much more all tossed up together like a big ‘ole, yummy drama salad slathered in angst-and-intrigue dressing.  Yeah, it’s a terrible analogy, but for real, it’s good stuff.  And like I said, Morgan does a superb job of weaving all these threads and themes into one cohesive piece through all of her narrators.  It’s all a bit complex and impressive as it leads up to the exciting game-changing ending that left me with this eloquently-worded reaction: “What the WHAT?!” *salivating for the next book*

Before I spill anything more specific in regard to the plot, I’m going to move on to the characters:

Ingrid.  Though not a fighter like her sister Gabby, Ingrid has grown tired of always relying on someone else’s protection.  Slowly coming to terms with what she is, she desperately wants to learn how to control her Lectrux ability, so that she’s capable of protecting herself from those who would harm her.  Romantically though, the girl is a bit of a mess.  Her character torn between a boy she can never have and another who confuses her, frustrated me to pieces at times… and not always in a good way.

Gabby. Fiery, confident Gabby is reeling from the injury that left her face scarred.  She’s become a little more self-conscious and uncertain, determined to prove that she’s still relevant and valuable.  It’s a bit tough watching Gabby struggle through this book, honestly, but I love the direction Morgan is taking her character.

Grayson. Last book, Grayson was more the objective and our inside peek at the villain.  And because he was all muddled and not really himself, the reader didn’t really get the chance to know the real Grayson.  So, I love that we get to see more of him this book, and I found his perspective and his inner turmoil to be some of my favorite character bits.

How’s that for not being too specific? *wink*

Overall.  The Lovely and the Lost is a thrilling and impressive sequel, and I cannot wait to see where Morgan takes the story and the characters next. 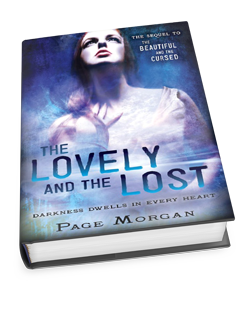