Vampire Empire is an alternate history, steampunk series set in 2020. In the late 1800’s a massive uprising of vampires overtook most of the colder climates of the world, pushing the human population towards the Equator where vampires cannot dwell. Princess Adele (Ah-DAY-la—I know…totally thought it was Ah-dell the entire time I was reading) is caught in the middle of huge political unrest and to top it all off, she is betrothed to an American Senator who she doesn’t even know. She sets off on a quest to the outer regions of her empire to show her undying love and support for her subjects, when her safety is compromised and she becomes the center of the vampires’ plot to overturn the human government. Enter the Greyfriar, a Robin Hood-esque hero whose mission is to protect humans from the Vampire Empire. That’s all you get because otherwise I will give away too many spoilers!

Ok so today I am going to try to keep the squealing to a minimum because I am a HUGE fan of this book! As usual, my dear friend Dani recommended this book…she recommends probably ¾ of the books I read and love! I was a bit skeptical just because it’s another one of those “Vampire” books. I’ve been growing a little tired of the vampire stuff to be honest and wasn’t sure about the whole alternate history thing. I was also very skeptical when I read that the Griffiths are also the authors of “The Tick” comics, which while humorous and clever are not my cup ‘o’ tea. However, it took me about two seconds of reading to decide this was something entirely other and entirely for me and here’s why.

First of all, I love, love, love a strong female lead and Adele is absolutely amazing. Love her strong-willed and sometimes stupid attitude which is perfectly balanced by the Greyfriar’s laid back and calm personality. I adore the Greyfriar. Since he is part of the mystery of the book I cannot say much about him without giving away a lot of magic. I will say this, he is endearing, loveable, and definitely a new favorite leading man.

I’m also a big fan of balancing plot and character development. If I had to choose between the two I would definitely pick character development, however, you can have great characters and no plot and end up with a lame story and vice versa so you have to have both…this novel is absolutely balanced. The plot moves forward at a delightfully smooth pace. I love the fact that you do not feel rushed to the end yet it doesn’t drag either. You can savor this book which makes it that much more appealing to me. The secondary characters are very well developed as well. There are characters you love and those you hate and those that you are just dying to know more about.

Then there is the whole predictability aspect that must be addressed. I’m usually pretty good at guessing what’s going to happen in a book which drives me nuts. I want a book to surprise me and leave me screaming “WHAT THE HECK JUST HAPPENED!!!!” If I can guess the twists before they turn I am disappointed and quite frankly bored. The unpredictability of the plot is just outstanding. I must have texted Dani a hundred times while reading to say “OMGosh, I can’t believe…just happened!” I can’t say anymore without squealing with delight.

My criticisms…Vampire Empire is really hard to say. Yep, that’s about all I can say because I love this book!

Bring on The Rift Walker…I need some more Greyfriar in my life! 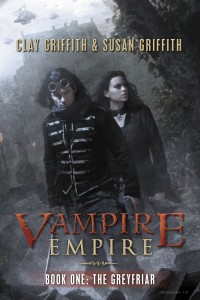