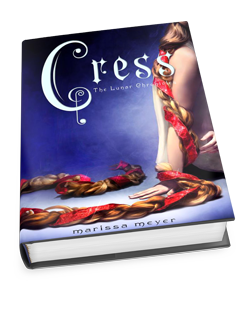 “Honestly, Thorne.” A girl.  Linh Cinder? “Do you ever think before you speak?”

“Did you see it?  It was like a cross between a magpie nest and a ball of yarn after it’s been mauled by a cheetah.”

“But you’re a prisoner,” said Thorne.

“I prefer damsel in distress,” she murmured.

One side of Thorne’s mouth quirked up, into that perfect half smile he’d had in his graduation photo.  A look that was a little bit devious, and all sorts of charming.