A romantic and fantastical reimagining of the classic Cinderella tale, Gilded Ashes is a novella by Rosamund Hodge set in the same world as the author’s debut novel, Cruel Beauty.

Orphan Maia doesn’t see the point of love when it only brings pain: Her dying mother made a bargain with the evil, all-powerful ruler of their world that anyone who hurt her beloved daughter would be punished; her new stepmother went mad with grief when Maia’s father died; and her stepsisters are desperate for their mother’s approval, yet she always spurns them. And though her family has turned her into a despised servant, Maia must always pretend to be happy, or else they’ll all be struck dead by the curse.

Anax, heir to the Duke of Sardis, doesn’t believe in love either—not since he discovered that his childhood sweetheart was only using him for his noble title. What’s the point of pretending to fall in love with a girl just so she’ll pretend to fall in love with him back? But when his father invites all the suitable girls in the kingdom to a masked ball, Anax must finally give in and select a wife.

As fate would have it, the preparations for the masquerade bring him Maia, who was asked by her eldest stepsister to deliver letters to Anax. Despite a prickly first encounter, he is charmed and intrigued by this mysterious girl who doesn’t believe in love. Anax can’t help wishing to see her again—and when he does, he can’t help falling in love with her. Against her will, Maia starts to fall in love with him too. But how can she be with him when every moment his life is in danger from her mother’s deadly bargain?

Cruel Beauty was AMAZING.  A dark fairytale — beautiful, and ugly, and disturbing, and romantic.  And this promises more of the same.  Cannot.  Wait. 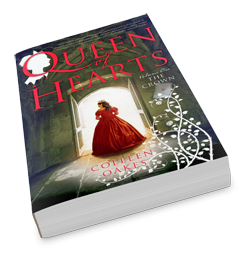 Queen of Hearts: The Crown

Not every fairytale has a happy ending.
This is the story of a princess who became a villain.
***
A Father’s Betrayal. A Kingdom with a Black Secret. A Princess Slowly Unraveling.

As Princess of Wonderland Palace and the future Queen of Hearts, Dinah’s days are an endless monotony of tea, tarts, and a stream of vicious humiliations at the hands of her father, the King of Hearts. The only highlight of her days is visiting Wardley, her childhood best friend, the future Knave of Hearts — and the love of her life.

When an enchanting stranger arrives at the Palace, Dinah watches as everything she’s ever wanted threatens to crumble. As her coronation date approaches, a series of suspicious and bloody events suggests that something sinister stirs in the whimsical halls of Wonderland. It’s up to Dinah to unravel the mysteries that lurk both inside and under the Palace before she loses her own head to a clever and faceless foe.

Part epic fantasy, part twisted fairy tale, this dazzling saga will have readers shivering as Dinahs furious nature sweeps Wonderland up in the maelstrom of her wrath.

Familiar characters such as Cheshire, the White Rabbit, and the Mad Hatter make their appearance, enchanting readers with this new, dark take on Alice’s Adventures in Wonderland.

Wonderland…the up and coming Queen of Hearts, court intrigues…I’m so into that! =)