organized by YA BOUND 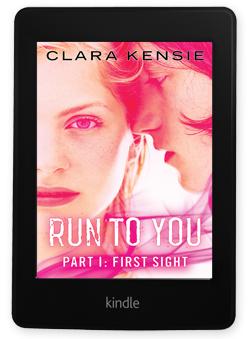 Part One in the riveting romantic thriller about a family on the run from a deadly past and a first love that will transcend secrets, lies and danger…

Sarah Spencer has a secret: her real name is Tessa Carson, and to stay alive, she can tell no one the truth about her psychically gifted family and the danger they are running from. As the new girl in the latest of countless schools, she also runs from her attraction to Tristan Walker—after all, she can’t even tell him her real name. But Tristan won’t be put off by a few secrets. Not even dangerous ones that might rip Tessa from his arms before they even kiss…

To clarify, this is a review of the first novella, First Sight, only.

Tess Carson (current alias, Sarah Spencer) has been on the run from a killer for half her life.  Her family marked for death, they move from town to town across the United States, ever-vigilant, always prepared to run the moment he finds them again.  And he always manages to find them.  Thanks to her dad’s supernatural gifts, however, they are always able to stay just one step ahead, evading capture and certain death.  It’s a pretty terrifying, transitory way to grow up. While her brother and sister never seem to have any trouble fitting into new environments and making new acquaintances where ever they go, Tessa shies  away from developing relationships, not wanting to lie to the people she could potentially care about, the people she’ll be forced to leave.  And then she meets Tristan, and everything begins to change.

Tessa proved to be a pretty interesting character, when all was said and done.  She’s not a particularly strong character in the first novella — the only member if her family to be entirely without a paranormal power she depends heavily on her family to keep her safe– she’s not extremely self-reliant, she’s a bit of a shrinking violet, is almost always afraid, and often feels inadequate and separate from the rest of her super-charged family.  All of which could provide a great potential springboard for some fantastic character development for Tessa in subsequent novellas.

While this little novella definitely has things going for it — the super powers, a mysterious villain, interesting characters — I do have a few issues with it.  I know this series is classified as a “romantic thriller” and I love romance, however, I can’t help but wish that his first installment had been a little less romance focused, and that more focus on the thriller part — backstory/world/plot development — had occurred.  While we’re given a vague explanation as to why the Carson’s live in this constant state of terror, it doesn’t seem quite enough to explain it.   I know it’s all probably coming, and the story is still interesting, but somewhat missing that prevalent sense of urgency and danger that it felt like it was trying to convey.  I also didn’t quite understand the overprotective parents’ encouragement of outside relationships when it was clear that those could be extremely dangerous.  And the romance, while cute, escalates rather quickly with a chunk happening off-page, which was a little unsatisfying and prevented me from being fully invested in Tessa & Tristan’s relationship.   Given the blurbs of the next two novellas, I have a feeling Kensie developed the romance quickly for a specific reason, but it left me feeling a little detached in this first one.

Part Two in the riveting romantic thriller about a family on the run from a deadly past and a first love that will transcend secrets, lies and danger…

Tessa Carson has unlocked her heart and her secrets to Tristan Walker—but Tristan has secrets of his own, and his might just mean the end of Tessa’s family. Unaware, Tessa embraces falling in love and being herself for the first time since she was attacked when she was only eight years old. But secrets can’t be run from forever, and sometimes love is too good to be true… 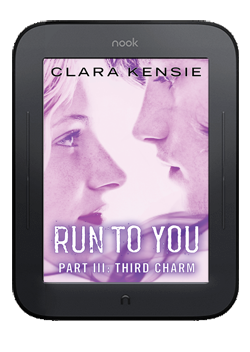 Part Three in the riveting romantic thriller about a family on the run from a deadly past and a first love that will transcend secrets, lies and danger…

Betrayed, heartbroken, and determined to save her family, Tessa Carson refuses to give in to Tristan Walker’s pleas for forgiveness. But her own awakening psychic gift won’t let her rest until she uncovers the truth about her family and her past. And Tristan is the only one who can help her sift through the secrets to find the truth hidden in all the lies…

Clara Kensie grew up near Chicago, reading every book she could find and using her diary to write stories about a girl with psychic powers who solved mysteries. She purposely did not hide her diary, hoping someone would read it and assume she was writing about herself. Since then, she’s swapped her diary for a computer and admits her characters are fictional, but otherwise she hasn’t changed one bit.

Her favorite foods are guacamole and cookie dough. But not together. That would be gross.

3 winners will receive a package of Harlequin TEEN books which includes:

RULES AND RESTRICTIONS:
Contest is void where prohibited. Entrants must be 18 or else have parent or guardian’s permission to enter. Winners will be notified via email and will have 48 hours to respond or another winner’s name will be selected. Winning entries will be verified for authenticity.