My Ex From Hell is a YA romantic comedy/Greek mythology smackdown. Love meets comedy with a whole lot of sass in book one of this teen fantasy romance series. Compared to Kai and Sophie, Romeo and Juliet had it easy.  (Goodreads summary)

I really love Persephone retellings. I think they are super interesting and usually give a very different spin on an ancient story, which let’s be honest has to be tough, especially since it’s been done so much lately. So, when I saw My Ex From Hell, I was intrigued.

The story was really fun. I enjoyed the twists on the original Persephone myth and the changes Tellulah Darling made. This was a very different retelling than anything else I’ve read about Greek mythology, and in some ways, that was a really good thing. However, this novel lacked a lot in character development and plot development. Sophie also sort of confused me. I would feel like I was getting a grasp on her character, then she would throw something off-the-wall in, and I would be back to square one. Kai was very intriguing, but I felt like I couldn’t get to know him very well since he didn’t get a lot of “screen” time or character development.

Overall, I’m interested in knowing what happens next, but it isn’t really favorite shelf worthy at this point. 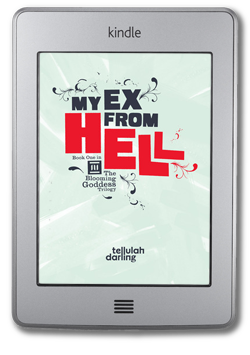