Today we’re welcoming Joanna Wiebe to the blog to celebrate the upcoming release of her novel, The Unseemly Education of Anne Merchant with a “tour” of the places that inspired the fictional location of Anne’s school… which just so happens to be in Maine! (Which, as you know, is a super cool state.  I’m rather partial to it).  So lace up those mental hiking boots, and let’s go!

CS Lewis is one of my favorite authors. If you’ve read his satirical novel The Screwtape Letters, you’ll remember the person to whom Demon Screwtape’s letters are addressed: his nephew Wormwood. Wormwood and his uncle live in a land where the seven deadly sins are, essentially, the seven virtues and spiritual progress is anything but. 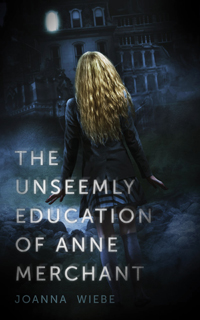 It was with Lewis’s story in mind that I first began to conceive of Wormwood Island, the setting for my novel The Unseemly Education of Anne Merchant (out Jan 14). Given the nature of Lewis’s Wormwood, it might not surprise you to learn that some rather sinister events are brewing on Wormwood Island – or that the place does a pretty brutal job of disguising its own darkness.

At the risk of sounding like I swipe all of my ideas from other sources, I’d love to talk you on a walk through the places that inspired Wormwood Island. Grab your umbrella – it’s gonna get rainy.

If you’d like, you can pretend you’re Anne Merchant: five-foot-ten, solid-built, sixteen, originally from California, and desperate to put high school behind you. Your dad just shipped you across the country to this strange little island the doesn’t allow visitors and that has a red line painted across its center…

I live on Vancouver Island and spend a lot of time in this extremely tiny fishing-meets-surfing town called Ucluelet, which heavily influenced how I imagined Wormwood Island. It’s rugged; it’s narrow; it’s overgrown; and it’s entirely exposed to the ocean – which brings for amazing storms. If you were to take a boat to Wormwood Island, I imagine you would see something very much like this: 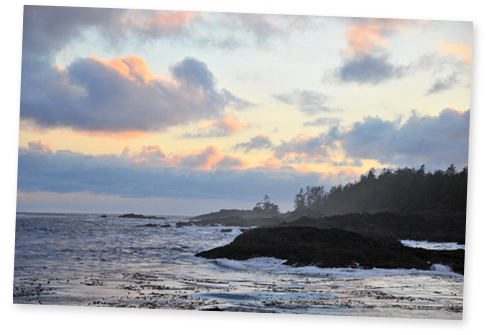 Now, no fictional location is based entirely on a real place, right? So although the lower areas of Wormwood look like Ucluelet, the higher places – like the cliff behind Cania Christy Preparatory Academy – are amalgamations of places on Vancouver Island like this: 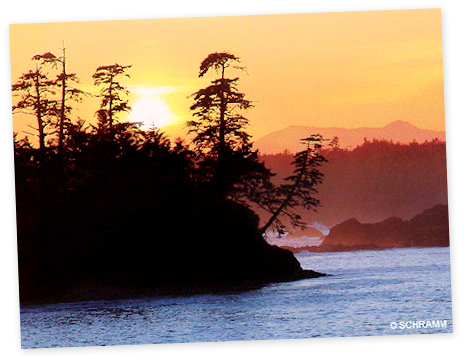 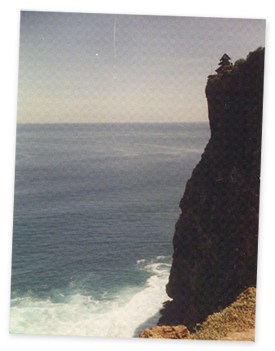 I’ve never actually been to the Maritimes in eastern Canada, but I’ve always – always, ever since I was a little girl reading Anne of Green Gables – held their whitewashed, windblasted little fishing shacks in the highest regard. The villagers on Wormwood Island originally lived in little houses just like this one: 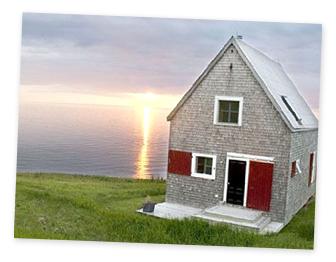 But when Cania Christy opened just north of their village, the villagers were able to afford much more luxurious homes. Mansions, really. And these homes speckle the southwest hillside of the island, looking out toward Kennebunkport: 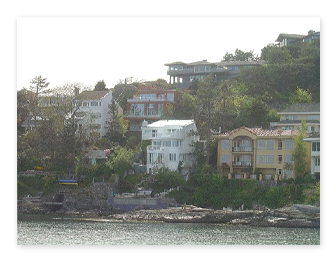 The village is at the southernmost point of Wormwood Island, and a road running from its center will take you straight up to its northernmost point. As you drive north out of the village, you’ll see a sign noting the ever-decreasing villager population… then woods on both sides, which will stop only at two points: a clearing for the homes of the Zin family and Gigi Malone, and the campus of Cania Christy.

For now, let’s bypass the homes – we’ll finish with those – and head to campus. A rather traditional-looking boarding school, Cania Christy could be like any private school for wealthy teenagers: 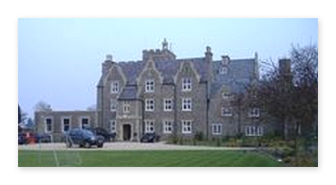 That’s how you’d see Goethe Hall. That’s how Anne would see it. That’s how the parents who send their kids to Cania Christy would see the school’s main building…

But that’s not how I see it.

It might sound strange, but, for me – when we’re talking about inspiration – Cania Christy is a ruin. It is a place best seen by looking at this: 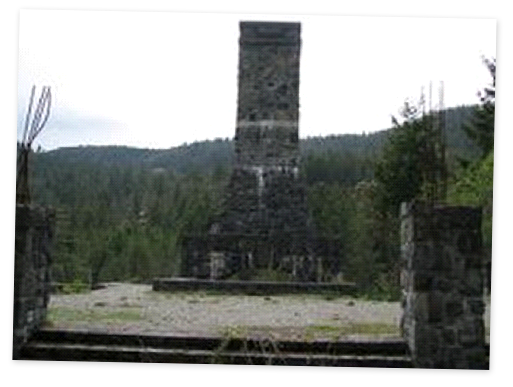 What the hell is that, you ask? 😉 That, my friend, is a dream interrupted. It’s known now to locals around here as The Ruins or Ruined Lodge, but it began many years ago as the fireplace that would have been in the lobby of a spectacular lodge that will never be. I first stumbled across these ruins about a decade ago: I was walking with my sister through a beautiful national park on Vancouver Island, and all at once we found ourselves on a staircase staring at a fireplace. Odd, right? Totally. But once we got over the strangeness of it, you couldn’t help but feel a little sad… and a little angry.

Sad for the builder whose vision still shows today, even with moss and time chipping away at it.

Anger at the builder for giving up. For abandoning his dream. For leaving a nearly permanent reminder to everyone walking through that everything – perhaps especially dreams – dies.

Cania Christy doesn’t look like a half-finished lodge. But, to me, it feels the same.

…Sounds depressing, right? I assure you it’s not! With any luck you won’t feel strange about Cania Christy until, oh, the last ten percent of the book! Speaking of which, here’s the Ucluelet beach that inspired the bonfire scene at the end. If you darken the sky and put an enormous fire in the middle of this image, you can almost see Harper Otto standing before the fire with dozens of her classmates at her feet as she recounts the incredible sum her parents paid for her admission to Cania Christy: 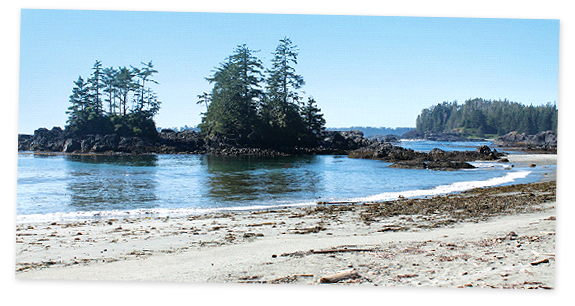 And now, finally, as promised, let’s go back down the island to the homes of Dr. Zin and Gigi Malone – which are, actually, the homes of Ben Zin and Anne Merchant, a pair you may or may not wish to see together. Dr. Zin’s house is just north of Gigi’s, just on the opposite side of the nefarious, not-to-be-crossed red line (which Anne actually crosses every day).

It wasn’t until I was done the book and starting to answer questions about it that I realized just how heavily Molly Ringwald’s bedroom in Sixteen Candles helped shape Anne’s bedroom in my mind. I am, without question, a huge John Hughes fan, and I like to keep in mind the feel-goodness of his stories when I’m letting my natural tendency toward darkness creep in a bit too much.

Anne lives in the attic of Gigi’s tall, creaky cottage, which looks something like this: 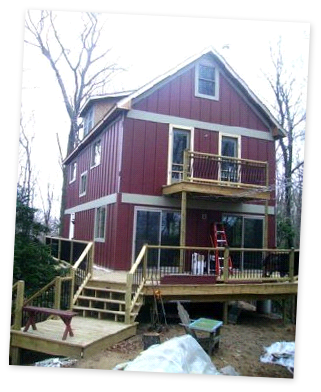 One flight of stairs brings you up to the second floor, where you’ll see a door to the attic. Open that door, and you are technically in Anne’s room – just at the bottom. Much like Molly Ringwald’s bedroom, which this image sortuv shows: 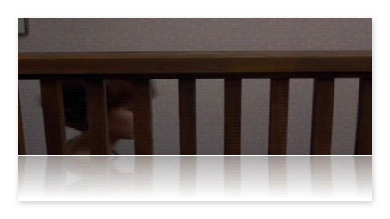 That concludes our brief walk through the inspirations for Wormwood Island, which range from a CS Lewis novel to a John Hughes movie. It’s always a little scary to show photos of inspirations, I think, because it can limit the imagination – like seeing a movie before you read the book. But I hope it gives you a nice, not-too-detailed glimpse into the strange, secretive world Anne finds herself in when she moves to Wormwood Island.

Joanna Wiebe is the author of The Unseemly Education of Anne Merchant, available Jan 14, 2014 from BenBella Books. Amy Plum called the novel “deliciously dark”, and VOYA said it’s great for fans of Anna Dressed in Blood. 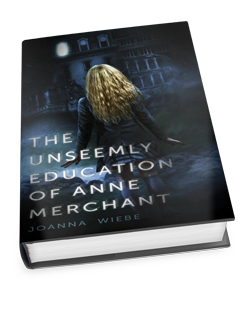 So many secrets for such a small island. From the moment Anne Merchant arrives at Cania Christy, a boarding school for the world’s wealthiest teens, the hushed truths of this strange, unfamiliar land begin calling to her—sometimes as lulling drumbeats in the night, sometimes as piercing shrieks.

One by one, unanswered questions rise. No one will tell her why a line is painted across the island or why she is forbidden to cross it. Her every move—even her performance at the school dance—is graded as part of a competition to become valedictorian, a title that brings rewards no one will talk about. And Anne discovers that the parents of her peers surrender million-dollar possessions to enroll their kids in Cania Christy, leaving her to wonder what her lowly funeral director father could have paid to get her in… and why.

As a beautiful senior struggles to help Anne make sense of this cloak-and-dagger world without breaking the rules that bind him, she must summon the courage to face the impossible truth—and change it—before she and everyone she loves is destroyed by it. 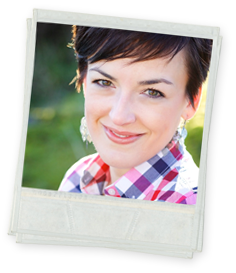 By day, Joanna is a copywriter and the co-founder of CopyHackers.com and Page99Test.com, a critique site for published and unpublished writers. As an undergraduate student, Joanna won several academic awards for excellence in creative writing: Canada’s James Patrick Folinsbee Prize, which she won twice, as well as the Godfrey Prize.

After graduating, she lived for a year on the remote northern island of Hokkaido, Japan, which is the inspiration for the verdant Wormwood Island of the V Trilogy. She holds a BA in Honors English and an MA in Communications from the University of Alberta and lives with her partner Lance in Victoria, British Columbia.

The Unseemly Education of Anne Merchant is her first novel and the first installment in the V Trilogy.

Enter to win ONE of 15 finished copies of The Unseemly Education of Anne Merchant!