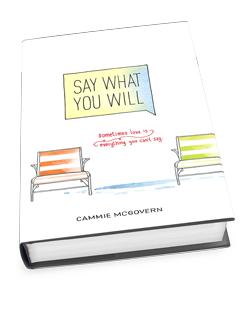 Say What You Will

I want someone who will talk to me honestly about things. You’re the only person who ever has. Maybe you don’t know this, but when you’re disabled almost no one tells you the truth. They feel too awkward because the truth seems too sad, I guess. You were very brave to walk up to the crippled girl and say, essentially, wipe that sunny expression off your face and look at reality. That’s what I want you to do next year. Tell me the truth. That’s all.

Amy and Matthew didn’t know each other, really. They weren’t friends. Matthew remembered her, sure, but he remembered a lot of people from elementary school that he wasn’t friends with now.

Matthew never planned to tell Amy what he thought of her cheerful facade, but after he does, Amy realizes she needs someone like him in her life.

As they begin to spend more time with each other, Amy learns that Matthew has his own secrets and she decides to try to help him in the same way he’s helped her. And when what started out as a friendship turns into something neither of them expected, they realize that they tell each other everything—except the one thing that matters most.

Why?  This just sounds… refreshing and potentially heartwarming. Two people bonding over handicaps, emotional and physical.

Love Letters To The Dead

It begins as an assignment for English class: Write a letter to a dead person. Laurel chooses Kurt Cobain because her sister, May, loved him. And he died young, just like May did. Soon, Laurel has a notebook full of letters to people like Janis Joplin, Amy Winehouse, Amelia Earhart, Heath Ledger, and more; though she never gives a single one of them to her teacher. She writes about starting high school, navigating new friendships, falling in love for the first time, learning to live with her splintering family. And, finally, about the abuse she suffered while May was supposed to be looking out for her. Only then, once Laurel has written down the truth about what happened to herself, can she truly begin to accept what happened to May. And only when Laurel has begun to see her sister as the person she was; lovely and amazing and deeply flawed; can she begin to discover her own path.

I’m super intrigued by the idea of a girl using a writing assignment to deal with issues that are too big for her. Sounds full of potential.