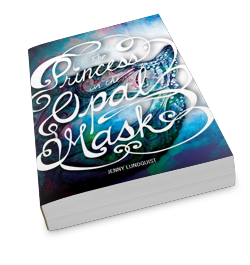 Orphaned as a child in the crumbling village of Tulan, Elara is determined to learn her true identity, even if it means wielding a dagger. Meanwhile, in Galandria’s royal capital, Princess Wilha stands out as someone to either worship or fear. Though no one knows why the king has always made her conceal her face–including Wilha herself.

When an assassination attempt threatens the peace of neighboring kingdoms, Elara and Wilha are brought face to face . . . with a chance at claiming new identities. However, with dark revelations now surfacing, both girls will need to decide if brighter futures are worth the binding risks.

But both the old woman and the young queen understand that the right words, spoken at the right time, can become more powerful than a thousand swords.  The right words scatter like seeds.  They are watered by rumor and grown by time.

Until one day, they become legend.

~p. 9, The Princess in the Opal Mask by Jenny Lundquist

“There are only two reasons a non-seer would see a spirit on St. Mark’s Eve,” Neeve said. “Either you’re his true love . . . or you killed him.”

It is freezing in the churchyard, even before the dead arrive.

Every year, Blue Sargent stands next to her clairvoyant mother as the soon-to-be dead walk past. Blue herself never sees them—not until this year, when a boy emerges from the dark and speaks directly to her.

His name is Gansey, and Blue soon discovers that he is a rich student at Aglionby, the local private school. Blue has a policy of staying away from Aglionby boys. Known as Raven Boys, they can only mean trouble.

But Blue is drawn to Gansey, in a way she can’t entirely explain. He has it all—family money, good looks, devoted friends—but he’s looking for much more than that. He is on a quest that has encompassed three other Raven Boys: Adam, the scholarship student who resents all the privilege around him; Ronan, the fierce soul who ranges from anger to despair; and Noah, the taciturn watcher of the four, who notices many things but says very little.

For as long as she can remember, Blue has been warned that she will cause her true love to die. She never thought this would be a problem. But now, as her life becomes caught up in the strange and sinister world of the Raven Boys, she’s not so sure anymore.

“If we go that way, it seem less like we’ll be shot for trespassing.  We can’t be low profile because of your shirt.”

“Aquamarine is a wonderful color, and I won’t be made to feel bad for wearing it,” Gansey said.

~65%, The Raven Boys by Maggie Stiefvater