Or is it all a matter of perception?

Typically I summarize the books I review myself, but Perception’s official blurb describes the book so perfectly that I don’t think there’s anything I could do to improve upon it.  So here you have it, straight from Goodreads:

Your perception will sharpen once you see through a tiger’s eyes.

More than five hundred years after the apocalypse, the survivors of off-grid genetic experimentation have refined their mixed DNA to the point that humans and their animal counterparts share physical and mental links. Varying species have divided into districts, living in a tenuous peace under the President of Calem.

The world of Calem is fascinating to me.  It was a world that hints of things readers would recognize, tying it to our own, but it was altogether different and new.  I wanted to know more about it, the history behind its origins, how our world fell, how the ingenium were developed, why this society formed the way it did.  The world of Calem is divided into districts determined by type of ingenium (i.e. The Tiger District) or lack thereof.  These different districts radiate out from a central hub, The Center, which is the capitol of Calem.  The politics, strengths, people and attributes of each district are really interesting and I hope that later books explore some of the people and locations that were only briefly touched on in Perception.  Cashman includes a wonderful map of her world at the beginning of the book for those of us who are visual learners, and I found myself referring to it often.  It was a great and helpful addition to the book as I could visually track the action and the journeys of Ardana, Rijan and their companions.

At first glance, it may seem like this world has some major similarities to the world of The Hunger Games: Calem vs. Panem, both worlds have distinct districts, the Campaign vs. the Games. The set up is similar, but once you delve into the story that’s where the similarities for me ended.  Cashman has a different voice than Collins and the plot lines of each book are completely their own.  While The Hunger Games was a sci-fi/dystopian story, Perception felt more like a sci-fi/fantasy/historical.  The world of Calem was harsh, the government inevitably corrupt, and evil was a-brewing, but I wouldn’t call it a dystopia.  Although both stories are essentially about attaining freedom, they approach it in entirely different ways and come to entirely different conclusions.

I loved the idea of the ingenium.  Being bound to another creature and being able to telepathically communicate with them at all times is an intriguing concept.  I think it gives a character more depth when they are not only seeing themselves through their own eyes, but also through the eyes of another who loves them unconditionally.  Whether the perception of self is skewed or not because of that love, it lends some interest having access to multiple perspectives.  The bond that Ardana and Rijan shared was really touching — their friendship, love and willingness to sacrifice for the other.  When considering the overall theme of freedom, their relationship presents an interesting facet to the many-sided issue.

In regard to the ingenium, one thing I wished there was more of was the background behind why and how the ingenium came to be.  I do love stories that can take an idea such as this, own it and make it work with little explanation, which Perception does.  It’s a concrete part of this fictional world.  It’s accepted.  It just is.  However, I love to know the history behind things and I was dying to know how the ingenium came into existence.  Hopefully, it’ll be something Cashman explores in later books (Please!)

Perception had some really interesting things to say about freedom and well… perception.  These are ideas Cashman explores throughout the book as Ardana’s main motivation in this story is attaining freedom.  Freedom from her harsh life, from those who would rule over her, freedom to make her own choices, freedom for those she loves, freedom from being bound to another person, etc.  Her journey toward freedom is one of the most interesting aspects of the book as she comes to certain realizations about others, herself, her actions, her desires making her wonder if complete freedom is possible and how one’s perceptions plays into it all.

While there were many parts of this story that I enjoyed, I did have a few issues with it.  One of my main problems was that I had trouble following the action sometimes.  At times plans and motivations of main characters were not clear, and at times I wondered why people were doing certain things and what was going on.  It was not the “all will be revealed…” kind of lost.  It was the kind of lost where you know you should know what’s happening.  I found myself rereading sections to try and figure out what I was missing.  I don’t know if the plans required a knowledge of the characters that I just didn’t seem to have, or more brain-power than I possess (which is certainly possible) but a little more clarity in the explanation of plans would’ve been good.   Also, I felt that some of the dialogue was a little confusing at times and that once in awhile character reactions had me scratching my head.  All that said, the story was interesting, very fast-paced, had a large scope of movement (which I always enjoy) and kept me going even through those times where I wasn’t quite following.

Overall, Cashman has given her readers an exciting, romantic adventure debut that explores the ideas of what achieving freedom entails and how perception of truths and situations can shape one’s view of the world. 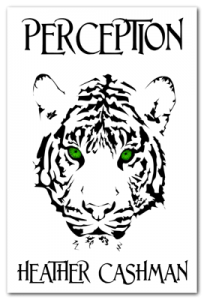 And I’m giving away ONE (1) Kindle copy of Perception to ONE (1) lucky winner!