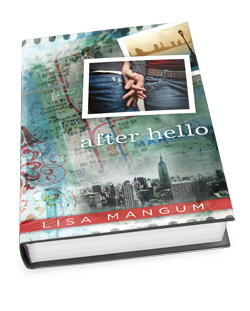 What if the first day of your relationship was the only day you had?

Seventeen-year-old Sara is a seeker. She’s always on the lookout for the perfect moment to capture with her ever-present, point-and-shoot camera, especially on her first trip to New York City.

Sam is a finder. He has a knack for finding what other people can’t—a first-edition book or the last two tickets to a sold-out Broadway show. In New York, there is always something interesting to find.

When Sam and Sara’s paths cross, neither one of them is prepared for what they will find out about each other—and about themselves when they form an unlikely partnership in search of a seemingly elusive work of art. They have one day to find the impossible. Fate brought their talents together, but what happens when time runs out? Will love be able to overcome fate?

“We’re all strangers in the beginning.”

“Then what are we in the end?”

“We’ll have to see when we get there.”

~5%, After Hello by Lisa Mangum

Jack is trapped for eternity in the Tunnels while Nikki has managed to evade Cole’s grasp . . . for now. But Cole is more desperate than ever to find answers about Nikki, his best chance for taking over the throne of the underworld. How did she survive the Feed? Can Cole find another Forfeit like her who can survive it too?

Cole’s quest leads him to the other side of the world, to a mysterious, dangerous society known as the Delphinians, whose price for information might be higher than Cole can pay—a price that could destroy Nikki. But when Cole attempts to steal the answers instead, his mission ends in disaster. Faced with centuries in a Delphinian dungeon, Cole is confronted with questions he’s been too scared to ask himself: Is he really obsessed with the throne—or is he obsessed with Nikki? And can she really give him a new beginning as the Everneath’s king . . . or will she instead bring about his tragic end?

Great.  There was no scenario in this whole damn thing where Jack didn’t come off looking as awesome as the love child of Thor and Optimus Prime.