Blurb: Everyone remembered the day the sky went black. The day the sun was wiped from the sky.  Read more…

Through Glass is tough for me to review because typically I don’t find my self so conflicted on a book – there were things I really, really like about this novel, and things I just really, really didn’t. So the easiest way to break this down is just to more or less make a pro & con list and tell you why.

I love the premise and overall concept that Ethington created. It’s different, and terrifying, and disturbing, and though the pacing lagged a little, she did a good job of communicating the utter bleakness and terror and isolation of Lexi’s life as she’s captive in the darkness in a house that reminds her daily of all she’s lost. Speaking of Lexi, I liked her character and how she changed and evolved. She was very much the every-girl who was continually trying to survive extraordinary circumstances, and I was invested in her story. I liked Cohen. He was pretty dreamy, and Ethington sold me on their long-time friendship from the very first.

While a fascinating concept, the execution was clumsy. Editing errors, awkward descriptions and phrasing, and redundancies in phrasing and thought were a major distraction. The action sequences were long, tended to be confusing and I just couldn’t picture what was happening in my head. The creatures Ethington sets up as the main villain are uber-creepy and well-developed, but the characterization of some of the more human villains and secondary characters felt rather cardboard-ish. And lastly, it required a little too much suspension of disbelief.

However, despite all the detractors – a few of which are usually immediate turn-offs — I remain intrigued. I’m curious to see if it’ll get any better, and I really want to know what happens next. 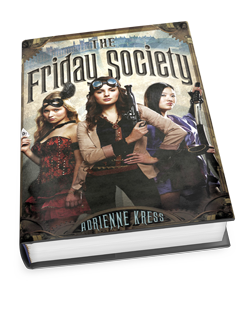 Blurb: Set in the past but with a modern irreverent flare, this Steampunk whodunit introduces three unforgettable and very ladylike–well, relatively ladylike–heroines poised for more dangerous adventures.  Read more…

The Friday Society was…interesting.  I really wanted to like this book.  I tried very, very hard to like it.  But alas, it was just not for me.

I did really enjoyed the sort of Victorian, girl power-ishness of the story and the fact that boys were not the main goal of these gals.  There were great moments of witty banter and the ending was rather fulfilling.  However, The Friday Society never really felt like it settled into a steady pace of plot development.

There was way too much going on plotwise and far too little development of secondary (and even primary) characters.  The idea of an ensemble cast with multiple points of view is not new, but there seemed to be way too much crammed into one story.  Perhaps if this has been a series, it would have worked out better but as one 440 page book, I never really felt that I got to know the characters well and when the plot finally resolved I was actually relieved to be done.   It was just…way too much.

Overall, The Friday Society was moderately amusing; yet it was entirely too long, had far too many twists, and far too little steampunk to fit my taste.