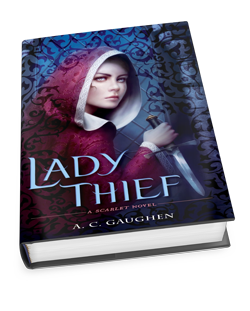 Scarlet’s true identity has been revealed, but her future is uncertain. Her forced marriage to Lord Gisbourne threatens Robin and Scarlet’s love, and as the royal court descends upon Nottingham for the appointment of a new Sheriff, the people of Nottingham hope that Prince John will appoint their beloved Robin Hood. But Prince John has different plans for Nottingham that revolve around a fateful secret from Scarlet’s past even she isn’t yet aware of. Forced to participate at court alongside her ruthless husband, Scarlet must bide her time and act the part of a noblewoman—a worthy sacrifice if it means helping Robin’s cause and a chance at a future with the man she loves. With a fresh line of intrigue and as much passion as ever, the next chapter in Scarlet’s tale will have readers talking once again.

While the last book wrapped up well enough to be a fantastic standalone, I cannot tell you how EXCITED I was to learn that Scarlet was getting a sequel.  >———————–☺———————-< (← approximately this excited x 86.)   There was one pretty big thread left loose that had me wishing on stars for another book, and… wish granted! I’m a pretty happy girl. 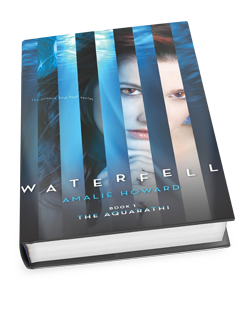 THE GIRL WHO WOULD BE QUEEN

Nerissa Marin hides among teens in her human form, waiting for the day she can claim her birthright—the undersea kingdom stolen from her the day her father was murdered. Blending in is her best weapon—until her father’s betrayer confronts Nerissa and challenges her to a battle to the death on Nerissa’s upcoming birthday—the day she comes of age.

Amid danger and the heartbreak of her missing mother, falling for a human boy is the last thing Nerissa should do. But Lo Seavon breaches her defenses and somehow becomes the only person she can count on to help her desperate search for her mother, a prisoner of Nerissa’s mortal enemy. Is Lo the linchpin that might win Nerissa back her crown? Or will this mortal boy become the weakness that destroys her?

This sounds like an “under the sea” story I could actually get into.  Lost kingdoms, missing mothers, undercover princesses…yeah, I’m there.