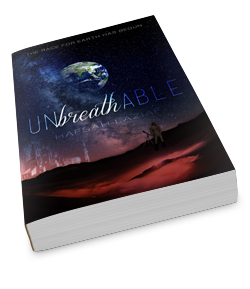 One hundred and fifty years ago, Earth was destroyed, and the remaining humans fled to the dusty red planet of Jutaire, where the only oxygen is manufactured, food is scarce, and death strikes often.

When Lissa’s father discovers Earth still exists, she accidentally inhales the toxic air of Jutaire, and in one breath, discovers she isn’t quite human.

Her father hangs for his discovery, and Lissa knows the Chancellors will come for her, for she saw the Earth that night too. With nothing to lose, she sets out to expose the truth. It isn’t long before she meets Julian, a beautiful boy who can breathe the toxic air like she can – and shows her that the Jute, the original inhabitants of the planet, are more tangled in their lives than she knows.

But the Chancellors are only pawns in a greater game – one where the Jute control everything. Worse, the Jute plan to leave Jutaire for Earth, but to get there, they need her. And they’ll stop at nothing until Lissa is in their clutches, even if they kill every human in the process.

The race for Earth has begun.

Why? Because sometimes you just need a good sci-fi/dystopian romance where the fate of the earth hangs in the balance and things aren’t always as they seem.  Yes, I have reading “moods” that specific.

Into The Still Blue

The earth-shattering conclusion to Veronica Rossi’s “masterpiece” Under the Never Sky trilogy and sequel to the New York Timesbestselling Through the Ever Night (Examiner.com).

Their love and their leadership have been tested. Now it’s time for Perry and Aria to unite the Dwellers and the Outsiders in one last desperate attempt to bring balance to their world.

The race to the Still Blue has reached a stalemate. Aria and Perry are determined to find this last safe-haven from the Aether storms before Sable and Hess do-and they are just as determined to stay together.

Meanwhile, time is running out to rescue Cinder, who was abducted by Hess and Sable for his unique abilities. And when Roar returns to camp, he is so furious with Perry that he won’t even look at him, and Perry begins to feel like they have already lost.

Out of options, Perry and Aria assemble a team to mount an impossible rescue mission-because Cinder isn’t just the key to unlocking the Still Blue and their only hope for survival, he’s also their friend. And in a dying world, the bonds between people are what matter most.

In this final book in her stunning Under the Never Sky trilogy, Veronica Rossi raises the stakes to their absolute limit and brings her epic love story to an unforgettable close.

I can’t wait to find out what happens.  What’s in the Still Blue?  Where will Aria and Perry end up?  Will they survive the journey?  What about Roar?  So many questions!  I NEED to know!!!