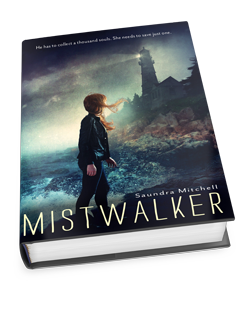 When Willa Dixon’s brother dies on the family lobster boat, her father forbids Willa from stepping foot on the deck again. With her family suffering, she’ll do anything to help out—even visiting the Grey Man.

Everyone in her small Maine town knows of this legendary spirit who haunts the lighthouse, controlling the fog and the fate of any vessel within his reach. But what Willa finds in the lighthouse isn’t a spirit at all, but a young man trapped inside until he collects one thousand souls.

Desperate to escape his cursed existence, Grey tries to seduce Willa to take his place. With her life on land in shambles, will she sacrifice herself?

Every time I look in the mirror and see my dime-silver hair and my eyes dark as molasses — every time I look across the water to Broken Tooth, hoping that the girl thinking of me will soon come to my shore — I’m reminded of my stupidity.

And I hate myself only a little for hoping she’s just as unwise.

An action-packed tale of gowns, guys, guns –and the heroines who use them all

Set in turn of the century London, The Friday Society follows the stories of three very intelligent and talented young women, all of whom are assistants to powerful men: Cora, lab assistant; Michiko, Japanese fight assistant; and Nellie, magician’s assistant. The three young women’s lives become inexorably intertwined after a chance meeting at a ball that ends with the discovery of a murdered mystery man.

It’s up to these three, in their own charming but bold way, to solve the murder–and the crimes they believe may be connected to it–without calling too much attention to themselves.

Set in the past but with a modern irreverent flare, this Steampunk whodunit introduces three unforgettable and very ladylike–well, relatively ladylike–heroines poised for more dangerous adventures.

“Everyone comfortable being on their own?” asked Cora in her take-charge kind of voice.  “By which I, of course, mean Nellie.  Michiko, I think you’ll be just fine.”

“I’m good.  I could’a taken them, if Michiko hadn’t.”  Nellie wasn’t entirely certain she spoke the truth, but she’d done okay with the creepy eyeball man, and then there was the footman the other night.  Besides worse came to worst, no one was better at disappearing than she was.  “How about you, though?”

Cora shrugged and produced a tiny gun from her purse.  “I’m good.”

They made their final farewells.

And then they were off.

Three girls into the night.