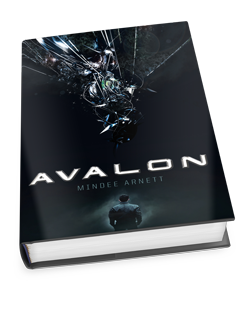 A ragtag group of teenage mercenaries who crew the spaceship Avalon stumble upon a conspiracy that could threaten the entire galaxy in this fascinating and fast-paced sci-fi adventure from author Mindee Arnett.

Of the various star systems that make up the Confederation, most lie thousands of light-years from First Earth-and out here, no one is free. The agencies that govern the Confederation are as corrupt as the crime bosses who patrol it, and power is held by anyone with enough greed and ruthlessness to claim it. That power is derived from one thing: metatech, the devices that allow people to travel great distances faster than the speed of light.

Jeth Seagrave and his crew of teenage mercenaries have survived in this world by stealing unsecured metatech, and they’re damn good at it. Jeth doesn’t care about the politics or the law; all he cares about is earning enough money to buy back his parents’ ship, Avalon, from his crime-boss employer and getting himself and his sister, Lizzie, the heck out of Dodge. But when Jeth finds himself in possession of information that both the crime bosses and the government are willing to kill for, he is going to have to ask himself how far he’ll go to get the freedom he’s wanted for so long.

Avalon is the perfect fit for teens new to sci-fi as well as seasoned sci-fi readers looking for more books in the YA space-and a great match for fans of Joss Whedon’s cult hit show Firefly.

Anything compared to Firefly is at least going to get a second glance from me.  The “show-that-hardly-was” is one of my favorite sci-fi TV series ever, and this does sound rather Firefly-ish to me.  It sounds dark, it sounds gritty, and it sounds immersively science fiction.  And the sibling/family thing… yeah.  *grabby hands*

Seventeen-year-old Cassie is a natural at reading people. Piecing together the tiniest details, she can tell you who you are and what you want. But it’s not a skill that she’s ever taken seriously. That is, until the FBI come knocking: they’ve begun a classified program that uses exceptional teenagers to crack infamous cold cases, and they need Cassie.

What Cassie doesn’t realize is that there’s more at risk than a few unsolved homicides— especially when she’s sent to live with a group of teens whose gifts are as unusual as her own.

Sarcastic, privileged Michael has a knack for reading emotions, which he uses to get inside Cassie’s head—and under her skin. Brooding Dean shares Cassie’s gift for profiling, but keeps her at arm’s length.

Soon, it becomes clear that no one in the Naturals program is what they seem. And when a new killer strikes, danger looms closer than Cassie could ever have imagined. Caught in a lethal game of cat and mouse with a killer, the Naturals are going to have to use all of their gifts just to survive.