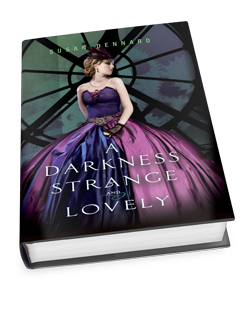 Following an all-out battle with the walking Dead, the Spirit Hunters have fled Philadelphia, leaving Eleanor alone to cope with the devastating aftermath. But there’s more trouble ahead—the evil necromancer Marcus has returned, and his diabolical advances have Eleanor escaping to Paris to seek the help of Joseph, Jie, and the infuriatingly handsome Daniel once again. When she arrives, however, she finds a whole new darkness lurking in this City of Light. As harrowing events unfold, Eleanor is forced to make a deadly decision that will mean life or death for everyone.

The instant my magic touched the Dead, a leash formed between us — but not a leash I could control.  This corpse wasn’t bound to a necromancer.  It was one of the Hungry: animated by a spark and searching frantically for any soul to consume.

~p. 186, A Darkness Strange and Lovely by Susan Dennard

An assassin’s loyalties are always in doubt.
But her heart never wavers.

After a year of hard labor in the Salt Mines of Endovier, eighteen-year-old assassin Celaena Sardothien has won the king’s contest to become the new royal assassin. Yet Celaena is far from loyal to the crown – a secret she hides from even her most intimate confidantes.

Keeping up the deadly charade—while pretending to do the king’s bidding—will test her in frightening new ways, especially when she’s given a task that could jeopardize everything she’s come to care for. And there are far more dangerous forces gathering on the horizon — forces that threaten to destroy her entire world, and will surely force Celaena to make a choice.

Where do the assassin’s loyalties lie, and who is she most willing to fight for?

“God’s above, you smell horrible,” he muttered.

She hissed and shoved him, her face burning in earnest now.  “Carrying around dead body parts for weeks isn’t exactly conducive to smelling nice!  And maybe if I’d been given time for a bath instead of being ordered to report immediately to the king, I might have–” She stopped herself at the sight of his grin and smacked his shoulder.  “Idiot.”  Celaena linked arms with him, tugging him up the stairs.  “Come on.  Let’s go to my rooms so you can debrief me like a proper gentleman.”

“Chaol?” she said after a few minutes.

“You know I absolutely hate it when he calls me Laena, don’t you?”

A smile tugged at his lips, along with a flicker of relief.  “So next time I want to piss you off…”

“Don’t you even think about it.”  His smile spread, and the flicker of relief turned to something that punched him in the gut when she smiled back.