To celebrate the release of The Bitter Kingdom Dani, Aly, and I decided to share some of our favorite moments from this fantastic trilogy.  If you haven’t read these novels, you really should give them a try.  They are AMAZING!

“What have you done to me?”

I want to tell him he is a fool.  I want to show him my own Godstone, alive and real.  I say nothing.

He grasps for his caged Godstone and thrusts it toward me, but the glow already fades.  “Why does it not burn you?” he demands, his voice garbled.  “Why?”  I respond in the Lengua Classica.   “Because it is not the will of God.” 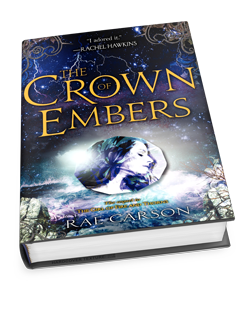 Elisa is the hero of her country. She led her people to victory against a terrifying enemy, and now she is their queen. But she is only seventeen years old. Her rivals may have simply retreated, choosing stealth over battle. And no one within her court trusts her-except Hector, the commander of the royal guard, and her companions. As the country begins to crumble beneath her and her enemies emerge from the shadows, Elisa will take another journey. With a one-eyed warrior, a loyal friend, an enemy defector, and the man she is falling in love with, Elisa crosses the ocean in search of the perilous, uncharted, and mythical source of the Godstone’s power. That is not all she finds.

The executioner whispers, in a voice as scarred and used-up as his skin, “Your Majesty, you must choose the instrument of punishment.”
It takes a moment for his words to sink in, and when they do, despair settles over me like a hot heavy blanket. Of course I must.

He says something else, but I don’t hear because my Godstone leaps. I gasp.
“Your Majesty?”
“I’m not sure…” The stone tingles, and then I feel the slightest brush across my belly,  like butterfly wings coalesce into something more solid, poking, prodding, and like ghost fingers, they reach painlessly into my stomach and pull. “Oh,” I breathe. “Oh my.”

“From habit, I turn to look for Hector, seeking his quiet approval.  I don’t catch myself until it’s too late, until I’ve lost him all over again.”

“… my current path means danger and maybe even death.  It’s terrifying.  But it’s a manageable terror.  Because I’ve chosen it.”

~65%, The Bitter Kingdom by Rae Carson

And just to top it all off, check out this amazing giveaway for signed copies of all three books!