Looking back, I wonder if I had an inkling that my life was about to go from ordinary to extraordinary.

When sixteen-year-old Lillie Hart meets the gorgeous and mysterious Tom Windsor-Smith for the first time, it’s like fireworks — for her, anyway. Tom looks as if he would be more interested in watching paint dry; as if he is bored by her and by her small Nebraskan town in general.

But as Lillie begins to break down the walls of his seemingly impenetrable exterior, she starts to suspect that he holds the answers to her reoccurring nightmares and to the impossible memories which keep bubbling to the surface of her mind — memories of the two of them, together and in love.

When she at last learns the truth about their connection, Lillie discovers that Tom has been hiding an earth-shattering secret; a secret that is bigger — and much more terrifying and beautiful — than the both of them. She also discovers that once you finally understand that the world is round, there is no way to make it flat again.

An epic and deeply original sci-fi romance, taking inspiration from Albert Einstein’s theories and the world-bending wonder of true love itself. (Goodreads summary)

Though initially intrigued by this book, ultimately, When The World Was Flat left me feeling rather unimpressed. Why? Well unfortunately, in the end, it proved to be just more standard trope-filled YA fare. I don’t necessarily mind tropes if they’re used creatively… or used sparingly, but this book was filled with them, and it felt very same old, same old <insert sci-fi schtick here>. New boy at school, inexplicable attraction, more inexplicable hot ‘n cold behavior, (spoilerly trope that I can’t reveal, but you’ll know it when you see it), evil mean girl who wants the inexplicably hot ‘n cold new boy with the inexplicable attraction to our MC, stalkerish/obsessive tendencies, love triangle-ishness, MC thinking she might be losing it as weirdness begins to manifest itself, single parent, and so on and so forth.

But it wasn’t just the clump of typical plot devices, it was the characters too. I might’ve been able to look past those if Lillie – the main character – was someone I could’ve connected with/rooted for/liked/been intrigued by. But she was just flat. I didn’t necessarily dislike her, I just never connected, and I didn’t really care. She was just… there. And Tom, the ever-broody and mysterious new boy remained a bit too broody and mysterious. While you eventually get the important highlights of his back story and while he was a big player in the story, I never really got a feel for who he really was as a character, and he ended up feeling very much the cardboard hero.

And their romance… it was extremely insta-love, which there is a kind of explanation for, but it too felt flat, insubstantial, and foundationless.

Adding to my list of “things I didn’t particularly care for,” the plot and the world. The world felt a little too nebulous for my taste, making me wonder “but why…?” about certain plot points. The plot was also a bit on the predictable side, and the pacing just plodded along. I don’t often DNF a book, but I considered it several times with this one, but figured, “Hey, Self, you’ve gotten this far already. Might as well keep going.” I will say this though, while I had guessed at the conclusion, I was impressed that Jonach actually went there with the story. But while I admired the risk, the ending still left me feeling a little hollow.

Overall, despite my hopes, When The World Was Flat (And we were in love) unfortunately failed to impress. 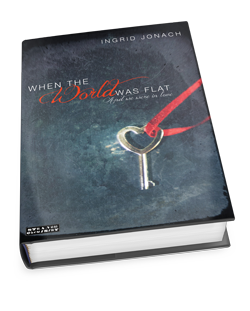 Author: Ingrid Jonach
Title: When The World Was Flat (And We Were In Love)
Published: Sept. 3, 2013 by Strange Chemistry
Format: 272 pages; Paperback
Website: www.ingridjonach.com
Source: NetGalley
My rating: