He can touch me, is what I’ll never tell him.

But things happen when people touch me.

No one knows why Juliette’s touch is fatal, but The Reestablishment has plans for her. Plans to use her as a weapon.

But Juliette has plans on her own.

After a lifetime without freedom, she’s finally discovering a strength to fight back for the very first time—and to find a future with the one boy she thought she’d lost forever.

I cannot even begin to tell you how many times I’ve heard this book raved about, praised, applauded, fangirled over, “Team Adam!”, “No, Team Warner!”-ed over. Heather alone has been on my case to pick this book up for at least a year now. But having made it a goal this summer to catch up on some of the books I’ve been putting off “for another day, week, month…. year” I decided it was time to finally read Shatter Me. I think what scared me off most were all the expectations that inevitably build up over so long a time. I mean, with all the book love, two novels and a novella out, I’ll admit, I was a bit fearful my expectations (which had become astronomically high) wouldn’t be met.

Yes… and no. Mostly yes.

I love Juliette to pieces for her spunk, her conviction, her goodness, her strength and her perseverance.  I love Adam for his devotion, his courage, his honor, his tattoos, and his sacrifices. And I love them together.  Their romance is just sigh-inducingly, bone-meltingly wonderful.

But if it’s any consolation to those of the #TeamWarner persuasion, Tahereh made me love to hate Warner.  He is just so amoral, so overbearing and arrogant, so ruthless and has the makings of a master manipulator.

What I loved most of all though? Seriously, what can I say about Tahereh’s gorgeous use of imagery other than: I adore it. I love it to the moon and back. I love that Tahereh constructed a singular voice for Juliette that at once showcases her tenuous grasp on sanity with such a unique perspective of reality – her almost emotional attachment to time and numbers, especially – while also being achingly beautiful, heartbreaking and lyrical. It’s the kind of thing I could read forever and a day.

Well, sure, since you asked…

“The sun is an arrogant thing, always leaving the world behind when it tires of us.

The moon is a loyal companion. It never leaves. It’s always there, watching, steadfast, knowing us in our light and dark moments, changing forever just as we do. Every day it’s a different version of itself. Sometimes weak and wan, sometimes strong and full of light. The moon understands what it means to be human.

I know you’ve probably seen that quote before, but…..GAH. I want to make myself a blanket out of Tahereh’s gorgeous, gorgeous words and just wrap myself up in it.

But anyway, yes. I really love most things about this book; however, in other areas it fell a little short of what I expected. Specifically, in regard to Warner’s relationship with Juliette. While I totally understand his obsession attachment to her, I never saw understood her seemingly unfounded emotional responses to him. There wasn’t enough development there, and mostly because I feel like, plot-wise, Juliette was yanked away from a certain situation far earlier than she should’ve been. Adam and Warner, besides being two extremely interesting and exceptionally good-looking leading men, are presented as representing two sides of Juliette’s personality, or potential sides – a choice between love and goodness and between vengeance and darkness. But the way the plot progressed, Warner didn’t have enough time to truly achieve this, to genuinely get into Juliette’s head. Didn’t manipulate her enough to undermine her beliefs and to cause some really good internal conflict. Didn’t have the time and relationship precedence to convincingly confuse Juliette emotionally in any way. At least in my opinion.  Her connection to Warner just seemed a contrivance to get that must-have love triangle device a foot in the door. Now, given the end of the book, I have some suspicions that may satisfactorily explain this. I’ve been told “Oh, wait until you read Unravel Me. Then you’ll understand.” But this book standing alone, as is? Juliette’s reactions to Warner don’t make sense, and I wish more development and story had been given to that part of the novel.

But, that said, in all other respects Shatter Me really was highly entertaining and a very exciting read, and I could see the series having favorite potential.

Overall. To all those who repeatedly recommended this book to me, “Thank you.” Shatter Me intrigued and captivated me, and I’m dying to continue on to Destroy Me so that I may finally understand… whatever it is that I’m supposed to understand. <wink> 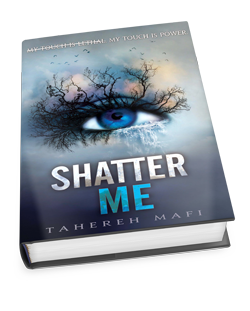