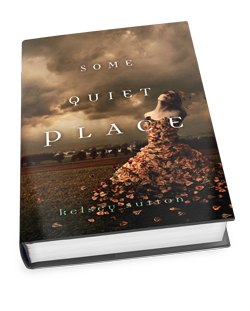 Elizabeth Caldwell doesn’t feel emotions . . . she sees them. Longing, Shame, and Courage materialize around her classmates. Fury and Resentment appear in her dysfunctional home. They’ve all given up on Elizabeth because she doesn’t succumb to their touch. All, that is, save one—Fear. He’s intrigued by her, as desperate to understand the accident that changed Elizabeth’s life as she is herself.

Elizabeth and Fear both sense that the key to her past is hidden in the dream paintings she hides in the family barn. But a shadowy menace has begun to stalk her, and try as she might, Elizabeth can barely avoid the brutality of her life long enough to uncover the truth about herself. When it matters most, will she be able to rely on Fear to save her?

“How long until I see you again?”  She’s fading fast now.  I should go get her parents.  But I don’t move.  It would seem like a betrayal to her, somehow.

48%, Some Quiet Place by Kelsey Sutton 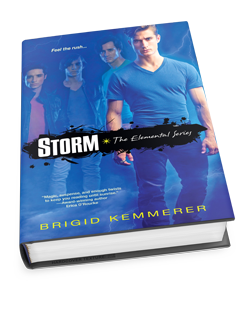 Becca Chandler is suddenly getting all the guys; all the ones she doesn’t want. Ever since her ex-boyfriend spread those lies about her. Then she saves Chris Merrick from a beating in the school parking lot. Chris is different. Way different: he can control water just like his brothers can control fire, wind, and earth. They’re powerful. Dangerous. Marked for death.

And now that she knows the truth, so is Becca.

Secrets are hard to keep when your life’s at stake. When Hunter, the mysterious new kid around school, turns up with a talent for being in the wrong place at the right time, Becca thinks she can trust him. But then Hunter goes head-to-head with Chris, and Becca wonders who’s hiding the most dangerous truth of all.

The storm is coming.

Michael must have liked the pancakes.  He cut another piece.  “I forgot what that was like.”

So she needed more cardio.