Somewhere between reality and myth lies…

With her eyes closed, her other senses ramped into high focus against her will — the tiniest breeze of his breath, the shush of his movements, the sea-smell of his skin. She’d preferred it when he’d been at a comfortable distance, silent and surreal. Having him so close made her feel shy and confused. There was nowhere to look away, nowhere to hide, nowhere to pretend that something else was going on other than his eyes intent on her. 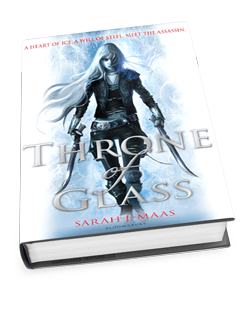 After serving out a year of hard labor in the salt mines of Endovier for her crimes, 18-year-old assassin Celaena Sardothien is dragged before the Crown Prince. Prince Dorian offers her her freedom on one condition: she must act as his champion in a competition to find a new royal assassin. Her opponents are men-thieves and assassins and warriors from across the empire, each sponsored by a member of the king’s council. If she beats her opponents in a series of eliminations, she’ll serve the kingdom for three years and then be granted her freedom.

Celaena finds her training sessions with the captain of the guard, Westfall, challenging and exhilirating. But she’s bored stiff by court life. Things get a little more interesting when the prince starts to show interest in her… but it’s the gruff Captain Westfall who seems to understand her best.

Then one of the other contestants turns up dead… quickly followed by another.

Can Celaena figure out who the killer is before she becomes a victim? As the young assassin investigates, her search leads her to discover a greater destiny than she could possibly have imagined.

Dorian leaned back in his throne.  “My father needs someone to aid the empire–someone to help him maneuver around difficult people.”

“You mean he needs a lackey for his dirty work.”

“If you want to put it that bluntly, then, yes,” the prince said.  “His Champion would keep his opponents quiet.”

“As quiet as the grave,” she said sweetly.

“Give me the sword!” she cried, her voice almost drowned out by the clang of metal on metal. She thrust her arm forward to take it, and in that moment, she was no longer Clary, his friend since childhood, but a Shadowhunter, an avenging angel who belonged with the sword in her hand.