Blurb: Peree knows what he’s doing as the new Keeper of the Water Bearer, Fennel… What he doesn’t know is that he’s falling in love with her.  Read more…

I already LOVE Peree, and now getting to see the beginning of his and Fenn’s story through his eyes, I love him even more.

I didn’t think that was possible, but I do. le sigh…

And not just Peree, but seeing Fenn through his eyes is a highlight as well, giving me an even greater respect for her and her courage.

Peree also gives us an invaluable view of the Lofties and what life looks like for them, further establishing the idea that the Lofties and the Groundlings are two groups of people who fiercely care for their own, who are acting on years of presumptions and prejudice (but who both grudgingly need each other), and how those prejudices have affected both their groups. Having now seen both sides, it makes Peree and Fenn’s curiosity about each other and their tentative willingness to look beyond their cultural conditioning all the more special. Overall, The Keeper isn’t necessary to the larger storyline, but I would highly recommend it due to the more well-rounded perspective and the fantastic character development it provides. 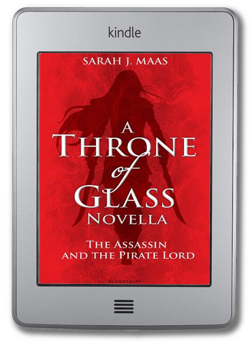 Blurb: On a remote island in a tropical sea, Celaena Sardothien, feared assassin, has come for retribution. She’s been sent by the Assassin’s Guild to collect on a debt they are owed by the Lord of the Pirates.  Read more…

For almost a year, I have been hearing about the awesome that is Throne of Glass. I’ve had Dani’s copy for about that long…since right after she finished it…and I’ve been putting it off for a ridiculously long time because well, I hesitate with books that EVERYONE loves because it’s so much precious for me. What if I don’t love it too? Plus, there is just a mood I have be in to read a book of such epic awesome…well, that mood hit me (plus I need to give Dani her book back ;))…but I had to read the prequel novellas first…because I’m like that.

So, The Assassin and the Pirate Lord… Wow, I really didn’t like Celaena at first. She’s rather prickly and arrogant. But by the end of this story, I felt like I was getting to know her and Sam fairly well. There’s a depth there that I simply must know more about. I’m intrigued. I love that she’s tough and self-sufficient. There’s growth that needs to happen for sure, but there is awesome to be found in this Throne of Glass series. =)