In Josephine Angelini’s compelling conclusion to the masterfully woven Starcrossed trilogy, a goddess must rise above it all to change a destiny that’s been written in the stars. With worlds built just as fast as they crumble, love and war collide in an all-out battle that will leave no question unanswered and no heart untouched.(Goodreads summary)

This series has been a strange one for me – very much a love/hate relationship throughout. There are certain aspects of it that I absolutely love: the whole mythologically-based world and how it works, the heartbreaking torment of Lucas & Helen, several of the characters (Hector and Orion, I’m looking at you.) and Josie’s plot development is pretty great overall. But then there are things that bug the everliving snot out of me – the rampant telling vs. showing, the multiple third person perspectives that constantly seem to switch never letting me connect with any one character long enough, the relationship development that needed more emotional foundation and the weirdly inconsistent quality of writing. Normally these are things that would make a book a definite no-go… but the story got under my skin.  Despite everything, it had my imagination hooked, and I just had to know how Helen & Lucas’ story ended.

And it ended with quite the bang! It meandered a bit the the beginning and suffered from and unnecessary plot devices, but on the whole I found Goddess to be exciting and action-packed as Helen deals with a new, emerging side of herself and as the Houses begin to deal with the divine mess Helen unknowingly unleashed upon the world. It was suitably and deliciously angst-ridden as Helen and Lucas continue to pine for what they cannot have. There was a fascinating back story for Helen as she begins remembering things long past. The politics in this book also proved to be very interesting (and heartbreaking) as battle lines begin to be drawn in preparation for the confrontation with Olympus. Also, I liked how Helen has evolved since Starcrossed, becoming more and more a force to be reckoned with. And the villains of the piece are pretty intimidating, the risks greater, the consequences graver.

Overall. It definitely had its flaws, but even so, Goddess proved to be a fitting end to this series, being at once both satisfying and bittersweet. 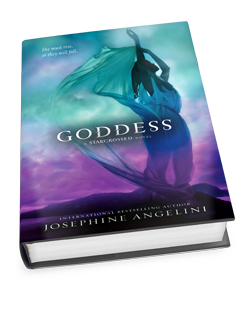