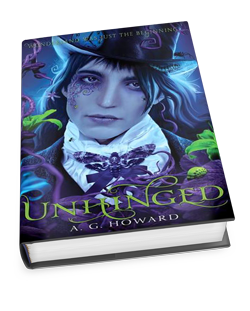 Alyssa Gardner has been down the rabbit hole and faced the bandersnatch. She saved the life of Jeb, the guy she loves, and escaped the machinations of the disturbingly seductive Morpheus and the vindictive Queen Red. Now all she has to do is graduate high school and make it through prom so she can attend the prestigious art school in London she’s always dreamed of.

That would be easier without her mother, freshly released from an asylum, acting overly protective and suspicious. And it would be much simpler if the mysterious Morpheus didn’t show up for school one day to tempt her with another dangerous quest in the dark, challenging Wonderland—where she (partly) belongs.

As prom and graduation creep closer, Alyssa juggles Morpheus’s unsettling presence in her real world with trying to tell Jeb the truth about a past he’s forgotten. Glimpses of Wonderland start to bleed through her art and into her world in very disturbing ways, and Morpheus warns that Queen Red won’t be far behind.

If Alyssa stays in the human realm, she could endanger Jeb, her parents, and everyone she loves. But if she steps through the rabbit hole again, she’ll face a deadly battle that could cost more than just her head.

I absolutely LOVED Splintered and I was ecstatic to learn that Howard was writing a second book.  I love Alyssa, I adore Jeb, and Morpheus… MORPHEUS.  I love the romance between Alyssa and Jeb, and the strange allure of Morpheus.  There will always be a part of Alyssa that belongs only to him… and it’s interesting and seductive and… awesome.  And the blurb!  It sounds like the crap hits the fan even more in this one.  Maybe I’m a super mean person, but I cannot wait! 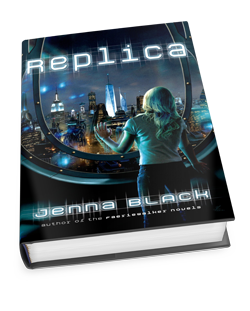 Sixteen-year-old Nadia Lake comes from a high-class Executive family in the Corporate States. Her marriage has been arranged with the most powerful family in her state, which means she lives a life of privilege but also of public scrutiny, followed everywhere by photographers, every detail of her private life tabloid fodder. But her future is assured, as long as she can maintain her flawless public image — no easy feat when your betrothed is a notorious playboy.

Nathan Hayes is the heir of Paxco — controller of the former state of New York, and creator of human replication technology, science that every state and every country in the world would kill to have. Though Nadia and Nate aren’t in love, they’ve grown up close, and they (and the world) are happy enough with their match.

Until Nate turns up dead, and as far as everyone knows, Nadia was the last person to see him alive.

When the new Nate wakes up in the replication tanks, he knows he must have died, but with a memory that only reaches to his last memory backup, he doesn’t know what killed him. Together, Nadia and Nate must discover what really happened without revealing the secrets that those who run their world would kill to protect.

I am, as a rule, not a sci-fi chick, but this just sounds too cool. I mean, sci-fi plus murder mystery plus possibly redeemable bad boy? I’m there.