With a playful nod to Jane Austen, Spies and Prejudice will captivate readers as love and espionage collide. (Goodreads summary)

I mean, Pride and Prejudice + Neptune’s one ‘n only girl gumshoe? Lizzy Bennet meets Veronica Mars? A heroine like that and… and I seriously might just keel over from the sheer amount of awesome. And Berry Fields is pretty awesome.

Berry. Vance did such a good job creating Berry, because she really is such a wonderful blend of both Lizzy and Veronica, while still being her own character.  Berry is intelligent, resourceful, capable, determined, dogged, unwilling to compromise, driven, sarcastic, highly opinionated and slightly cynical. Working part-time for her dad’s investigative firm, she grew up witnessing the seedier, more sordid side of human nature, learning how to read people and situations, and honing her super-sleuthing skills.  But she’s also a girl who, once upon a time, lost someone very important to her, and she’s coping the only way she knows how… to ignore it emotionally while doing whatever it takes to discover the truth. Her pain and her unwillingness to let go of this particular investigation into her own past reveals a girl who’s broken, a girl who, while somewhat jaded holds an almost child-like, single-minded faith and hope that the revelations she seeks will ease the ache in her heart.  She’s tough, sassy, and can go toe to toe with almost anyone —  a heroine to really root for — but Berry’s damage and baggage also make her a very sympathetic character.

Tanner. Le sigh… I will forever be in love with the Darcy hero archetype. It’s like my X-chromosomes Just. Cannot. Help. Themselves. Just hint at a Darcy-type hero, and I will read it, watch it, swoon over it.

Ok, I’m not quite that bad. But seriously, DARCY. <wild hand gestures for unnecessary emphasis>

Or rather, “But seriously, TANNER.” Vance did such a fantastic job of reimagining him. He’s formidable, capable, confident, off-putting, infuriating, prideful, but he’s also a little more outgoing than I expected, surprisingly sweet, a little more emotionally exposed, with moments of endearing dorkiness and social awkwardness.  Yeah, I was a goner from the moment he implied she was “tolerable.”

Romance. In this instance, it’s hard not to draw parallels between Lizzy & Darcy and Berry & Tanner, because taking a cue from the world’s best ever romance writer, Vance develops their relationship very similarly – with a healthy dose of pride, prejudice and willful misunderstanding. However, I love how much more interaction Vance gives Berry and Tanner in her novel. I love their banter. I love how Tanner is a bit more transparent than Darcy ever was. In Pride and Prejudice, Darcy is left very much a mystery, his reactions to people and situations before the ill-fated proposal and subsequent letter leaves the reader thinking that perhaps Lizzy is somewhat, if not wholly, justified in her hatred of the man. But in Spies and Prejudice, because Tanner is given more page time, and because I was given the chance to connect to him emotionally, the reader can more easily see past Berry’s unwillingness to view things as they are. And such and thusly, her prejudices against Tanner are showcased a bit more prominently.

It’s a fantastic romance, and really, though there’s a larger plot full of excitement and intrigue, this story really comes down to the love story element. It’s an exciting, sweet, slow-building burn as these two people come to understand and appreciate each other at a fundamental level. As with Austen’s story, there’s a wonderful depth to their relationship as they see each other at their absolute worst and lowest, and inversely, at their best and brightest. It’s… <sigh>… so wonderful. It’s a romance structure, that though it’s been played out, and reimagined, and retold hundreds or thousands of times, has such a timeless quality to it.  It’s the clash and confluence of two human hearts, a story which never grows old, and Vance tells it well.

Story. So the story was fast-paced, interesting, and packed full of little homages. I love that while Spies and Prejudice definitely tipped it’s hat to both the Austen novel and Rob Thomas’s teenage, film noir-esque girl sleuth, it felt like its own thing. The Pride and Prejudice references are loose, carrying over just enough elements and themes to keep it recognizable, without trying to pigeonhole every detail to make it all fit perfectly.  And ditto that on the VM vibes.  The mystery, while I had a pretty strong (and correct) hunch of how things were going to play out, was pretty decent, and it was still fun to watch Berry chase down leads and piece the clues together.

While I loved so much of this book, I did find Berry’s and others’ “situations” a bit outside the realm of believability. I also had a little trouble following the action at the climax of the book, where people were and what exactly was going on. But it didn’t bother me overly much, because whenever I started getting a little bent out of shape, the romance and banter would convince me to sit back down, shut up and just enjoy the ride.

Overall. A fantastic marriage of the humor, romance and depth of Austen with the sassy, edgy, angsty sexiness of Veronica Mars, Talia Vance’s Spies and Prejudice is a wonderful homage to two of my very favorite things, while still managing to be something altogether its own. 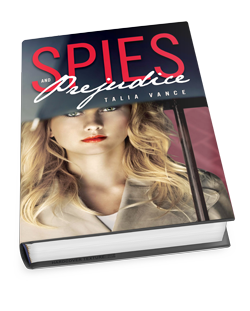 Source: Around the World ARC Tours