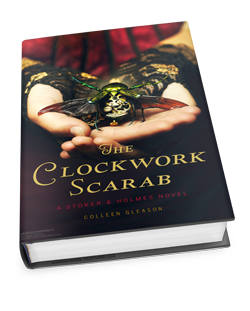 Two young women of similar age and standing have disappeared:  one found dead and the other still missing. The only clue to connect them is a small Egyptian clockwork scarab. Only Miss Stoker and Miss Holmes are well-positioned enough—similar in age and stature as they are to the victims—to investigate. An unlikely pair, the fierce Evaline Stoker and logical Mina Holmes must follow in the footsteps of their infamous families—Miss Holmes has inherited her Uncle Sherlock’s keen investigative skills, while Miss Stoker has accepted her family calling as a hunter of the undead. The partners must find a way to work together, while navigating the advances of a strange yet handsome American, a clever Scotland Yard investigator, and a cunning thief, to solve the mystery of the clockwork scarabs.

I felt him swallow hard, then he seemed to release a pent-up breath. “My apologies, Miss Holmes.  I meant no insult. Perhaps– oow-mph.” He stifled a cry of surprise as my pointed copper heel landed on one of his toes.

The misstep was an accident, but I cannot say I regretted it. 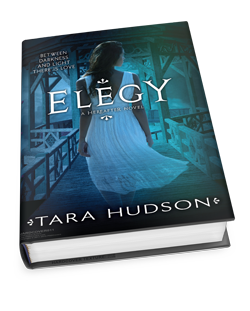 A stalker ghost, misguided Seers, and spellbinding wraiths—Amelia Ashley has faced them all. Now her greatest hope is to spend the rest of her afterlife with her living boyfriend, Joshua. But the demonic forces return to give her an ultimatum: turn herself over to the darkness or watch them murder one living person per week until she does.

Amelia fears she might really be doomed, until the forces of light give her another option. She can join them in their quest to gather souls, with a catch: Once she joins them, she can never see Joshua again.

Faced with impossible choices, Amelia decides to take her afterlife into her own hands—and fight back.

I turn my attention back to the gun.  Not to the person holding it, this time–just the gun itself.

She doesn’t reply, but I know she’s heard me.  With a weird instinct, she lowers the gun until it points directly at my heart.  For a split second, I think she’s chickened out.

Then I see the tiny spark of light, and my entire world rips into pain.