Two years ago, Clarabella moved to Red River Parish with her aunt after a tragic accident stole both her parents and her memories. She befriends a neighbor boy named Erik, a boy she finds unnaturally mesmerizing. A guy who – as she heart-breakingly discovers as the book opens – has blatantly violated their friendship and who now gives off a threatening vibe. Hurt and betrayed by his strange behavior and haunted by terrifying nightmares, she begins to unravel the mystery behind her memory loss. As her true identity slowly comes into focus, Clara is swept up into a fantastic adventure in a strange world where the battle between good and evil rages. And Clara has become a key player in the struggle. Forces will battle for her soul as two men wrestle for her heart. Whom will Clara choose?

Grand in scale and described in brilliant detail, the world of PineLight is simultaneously unsettling and lovely.  Evoking a fairytale feel while imaginatively weaving in religious and mythological elements, Peery creates an intriguing backdrop against which she tells her story. The physical rendering of the world is wonderfully described: from the haunting loveliness of the Louisiana bayou, to creaky sailing vessels, to magnificent castles, to surreal dreamscapes. I had no problem visualizing Clara’s surroundings, which remind me of a cross between Wonderland and Narnia.

However, despite the detailed descriptions, the explanation of the world wasn’t as clear as I would prefer. This might be a deliberate move on the part of Peery, as this is only the first book – the introduction – to her PineLight series.  She may be planning to reveal further fundamental details in subsequent books.  But I felt like a few key points were not clarified well enough for my understanding of this story, and made things a little confusing at times.

I don’t want to reveal too much of the plot beyond what I’ve already shared in the summary, because the fun and excitement of PineLight is in the twists and turns. Suffice it to say that the story was very fast-paced and always moved ahead with purpose. The mystery behind Clara’s forgotten past was well done and built at a nice suspenseful rate. I wish, however, that the revelation of the mystery had been a little more gradual, but nevertheless, it was enjoyable. I also loved the romance in this book. Again, I’ll be as vague as possible, but the way the romance played into the story, it could have seemed rushed and a little inst-a-romance-ish, but I thought it felt genuine, sweet and very well-developed.

Overall, Jillian Peery’s PineLight was a compelling, mysterious debut with an interesting mythology set in a hauntingly beautiful world.  I can’t wait to read the next installment in Clara’s story. 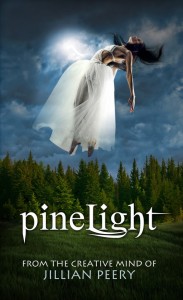 Win a copy of PineLight by Jillian Peery here!

And check out Refracted Light’s other giveaways on the sidebar…