Anna Van Housen is thirteen the first time she breaks her mother out of jail. By sixteen she’s street smart and savvy, assisting her mother, the renowned medium Marguerite Van Housen, in her stage show and séances, and easily navigating the underground world of magicians, mediums and mentalists in 1920’s New York City. Handcuffs and sleight of hand illusions have never been much of a challenge for Anna. The real trick is keeping her true gifts secret from her opportunistic mother, who will stop at nothing to gain her ambition of becoming the most famous medium who ever lived. But when a strange, serious young man moves into the flat downstairs, introducing her to a secret society that studies people with gifts like hers, he threatens to reveal the secrets Anna has fought so hard to keep, forcing her to face the truth about her past. Could the stories her mother has told her really be true? Could she really be the illegitimate daughter of the greatest magician of all? (Goodreads summary)

Anna has a secret – she can see the future. It’s a secret she’s carefully guarded and never revealed to anyone, especially not her famous medium mother who only plays at talking to the dead and telling peoples’ futures through trickery, research and guesswork. After a transient childhood full of close calls, narrow escapes from the law, and a constant whirlwind of carnivals, stages, seances, and performances across the country, fate (and their new manager) has finally brought Anna and her mother to New York City. They’ve booked their show at the Newmark Theatre, have starting catering to a more upper-crust clientele, and are living in an actual home for the first time in Anna’s life. Despite her growing discomfort with the deceit involved in her mother’s seances, she hopes that their current situation will provide them both with some stability, some respectability and some normalcy. But when her occasional psychic visions start occurring with alarming frequency revealing disturbing flashes of herself and her mother in danger, when her repertoire of supernatural gifts begins expanding, and when her handsome and mysterious downstairs neighbor seems to know something about her talents, Anna determines to get to the bottom of what’s going on.

Anna. I loved Anna. Her search for normalcy and her longing to have a family and roots is relatable, even amidst all of the abnormalities that surround her. Careful, cautious, observant, street-savvy, stubborn, resourceful, intuitive, brave, creative and resourceful – all these qualities make Anna a wonderful heroine to read and to root for. Anna’s tired of being on the move all the time, of deceiving the grieving and heartbroken, of keeping up the pretense that her mother isn’t a fraud. Her mother’s insistence on continuing to hold private seances helps put food on their table, but it also holds Anna hostage to a lifestyle she’s becoming more and more disenchanted with. A talented magician in her own right, Anna is also tired of being jealously pushed aside, always playing second fiddle to her limelight-loving mother. And yet no matter how complicated their relationship, Anna loves her mother, and has an overwhelming desire to protect her, no matter how frustrated she gets.

Mommy Dearest. And this was perhaps my favorite part of this novel – the complicated relationship Anna has with her mother. A medium, an actress, a diva, the consummate performer, Madam Marguerite Van Housen has never been an ideal mother due to her prevailing love of fame and performing. From a very early age, Anna was the one coming to her mother’s rescue, the one checking the marks and learning the local gossip, the practical one behind the scenes keeping their little duo together, forcing her to grow up quickly. Throughout the book, Anna is torn between her love and concern for her mother, and her exhaustion with navigating the emotional minefield of her mother’s manipulations, demands, ego, and games, all while being uncertain of the true nature of her mother’s feelings for her. I just loved how much focus Brown put on this most complicated female relationship and the resolution of this particular relationship between Anna and her mother.

“Two boys. And I call them Boy One and Boy Two.”1 Speaking of relationships, let’s talk romance and boys. Yes, boys plural. I know what you’re thinking, but though there are two potential male interests in this story, I never considered this story to be a true love triangle. Boy One is serious, smart, observant, perceptive, protective (while respectful of Anna’s independence), and has a rare, but surprising, sense of humor. Boy Two is outgoing, carefree, charming… and talks like he just finished reading The Cat’s Meow: 1920s Slang for Dummies.  Though it takes Anna a little longer (and rightly so, given her circumstances) it didn’t take me long at all to completely fall for one of them and I loved watching the romance between Anna and “Boy Who Wins Her Heart” develop.

“Are you watching closely?”2  All in all, Born of Illusion proved to be a pretty decent mystery. I guessed the ending long before the big reveal, but it didn’t bother me overly much and it was still entertaining to discover just how all the pieces fit together. It was a story that kept moving steadily forward, though I wish it had maintained a higher sense of urgency, especially at the end.

I also love the historical integration of the all the things that made this novel feel period – the clothes, the atmosphere, the spiritualist culture, the language – while, at the same time, the story also gives off a very modern vibe. Anna lived in an age in which women had just won the vote, in which they were becoming more independent of men and emerging from centuries of patriarchal repression and Teri Brown definitely captures that spirit in her heroine.

Overall. With a fantastic heroine, fun mystery, fascinating historical setting, and lovely romance, Born of Illusion is the bee’s knees.

2 quote from The Prestige 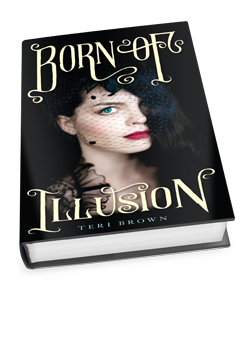 Source: Around the World Tours