If fate sent you an email, would you answer?

When teenage movie star Graham Larkin accidentally sends small town girl Ellie O’Neill an email about his pet pig, the two seventeen-year-olds strike up a witty and unforgettable correspondence, discussing everything under the sun, except for their names or backgrounds.

Then Graham finds out that Ellie’s Maine hometown is the perfect location for his latest film, and he decides to take their relationship from online to in-person. But can a star as famous as Graham really start a relationship with an ordinary girl like Ellie? And why does Ellie want to avoid the media’s spotlight at all costs?

Graham Larkin, a normal kid unexpectedly “catapulted into the limelight” with his first big movie role three years prior,  feels alienated and lonely in spite of his huge fan base, entourage and hangers-on.  He loves acting, but he craves that real human connection he had before fame found him, and he can’t seem to find it in the spotlight.  Just the opposite, Ellie has grown up in a small town protecting a secret that has the power to damage multiple lives, and so avoids drawing too much attention to herself.  When a twist of fate, in the form of a mistyped email address, leads to an ongoing email correspondence between Graham & Ellie providing them an outlet to just be themselves, Graham becomes determined to meet this girl whose emails have become the highlight of his day.  But when Ellie discovers her mysterious email penpal (and the guy she’s starting to seriously crush on) is none other than Hollywood superstar Graham Larkin, she’s torn between keeping her secrets and giving into her desire to be with the boy who’s been haunting her thoughts and her inbox.

Graham broke my heart with his loneliness and charmed me with his quick humor and genuineness.  Likewise, I admired Ellie’s spunk and how grounded she is.  Their’s isn’t a romance that moves mountains or “burns down the world,” but rather it’s wonderfully cute, fun and lighthearted, while also exploring some deeper issues as Graham and Ellie learn things about themselves and each other as a result of their budding relationship.  It’s the kind of book that makes one sigh happy sighs, swallow back a few tears, and eventually close the book with a contented smile on one’s face.

Overall, This is What Happy Looks Like is a sweet, refreshing story of appreciating happiness where you find it and of the beauty of first love. 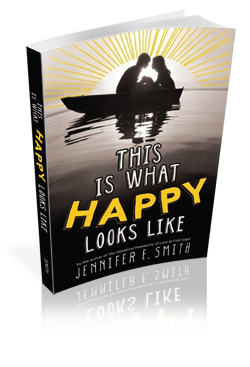