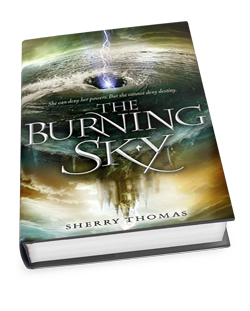 Iolanthe Seabourne is the greatest elemental mage of her generation—or so she’s being told. The one prophesied for years to be the savior of The Realm. It is her duty and destiny to face and defeat the Bane, the greatest mage tyrant the world has ever known. A suicide task for anyone let alone a sixteen-year-old girl with no training, facing a prophecy that foretells a fiery clash to the death.

Prince Titus of Elberon has sworn to protect Iolanthe at all costs but he’s also a powerful mage committed to obliterating the Bane to revenge the death of his family—even if he must sacrifice both Iolanthe and himself to achieve his goal.

But Titus makes the terrifying mistake of falling in love with the girl who should have been only a means to an end. Now, with the servants of the Bane closing in, he must choose between his mission and her life.

I’ve been in such a fantasy mood lately, and this one looks like it could be amazing — a messianic-ish prophecy, and oath of protection, an unexpected romance and a choice between vengeance or love.  Yup.  Sounds like something I’m totally in the mood for!

IN THE REAL WORLD, WHEN YOU VANISH INTO THIN AIR FOR A WEEK, PEOPLE TEND TO NOTICE.

After his unexpected journey into the lands of the fey, Ethan Chase just wants to get back to normal. Well, as “normal” as you can be when you see faeries every day of your life. Suddenly the former loner with the bad reputation has someone to try for-his girlfriend, Kenzie. Never mind that he’s forbidden to see her again.

But when your name is Ethan Chase and your sister is one of the most powerful faeries in the Nevernever, “normal” simply isn’t to be. For Ethan’s nephew, Keirran, is missing, and may be on the verge of doing something unthinkable in the name of saving his own love. Something that will fracture the human and faery worlds forever, and give rise to the dangerous fey known as the Forgotten. As Ethan’s and Keirran’s fates entwine and Keirran slips further into darkness, Ethan’s next choice may decide the fate of them all.

This…so much this…I must know where this series is headed. I SIMPLY must! A wayward son…more Ash and Puck…ultimate sacrifices (hey, it’s Julie…it’ll be in there somewhere!)…I am so there.