With his prospects of becoming a physician utterly ruined by some rather illicit activities, twenty year old Ward de’Ath turns to the only other occupation left to him – necromancy. When hired by Lord Carlyle to wake his recently deceased daughter, Celia, so that that the family may say their final goodbyes, Ward believes this to be a simple assignment: wake the girl for 15 minutes, cue tearful farewells, and then her soul will once again return back beyond the Veil. However, when Celia wakes, she insists that she’s been murdered and calls upon Ward’s oath as a physician for aid in keeping her animated long enough to find her killer. Before Ward knows what’s happening he’s following the beautiful, dead girl out of her bedroom window and straight into the underbelly of Brawenal – into a world of danger, intrigue, suspicion and magic where nothing can be taken at face value. Celia and Ward enter into an uneasy alliance with each other as they are drawn into the mystery surrounding Celia’s death. But when everyone is suspect, can they even trust each other?

Ward is a bit of an everyman, which makes him incredibly easy to relate to. He hails from the lower echelons of society, works hard for every penny he has, dreams of a better life and despite his run-ins with the law, he desperately wants to be seen as a respectable young man. Though the family business is necromancy, Ward has always desired to save lives before they pass, rather than bring them back from the beyond. He believes that pursuing the medicinal practice of surgery will help him become a better physician. Unfortunately for Ward, practicing surgery is deemed illegal and because he pursues this course, he is banned from becoming a doctor. Ward is left picking up the pieces of his dreams and falling back on necromancy for his livelihood – a skill he never felt he was much good at. Card does a wonderful job at painting him as a normal, decent guy who’s down on his luck. A guy who keeps his word, a guy who is unaccustomed to a life of danger, a guy who doesn’t have a whole lot of street smarts but who is a quick learner. Ward is the hero of the story – well-intentioned and honorable – but I love the fact that Card’s world is rarely portrayed as starkly black and white, especially when it comes to her characters. They are all shades of gray, including Ward. I also tend to love the unlikely heroes, and Ward certainly is that.

Celia was quite a piece of work. Born to wealth and privilege and a member of the assassin’s guild, she is a girl who know how to take care of herself. More likely to be slitting a man’s throat than agonizing over needlepoint, she’s adept at reading situations and people, subterfuge, handling weaponry, and is always mindful of the nearest escape route. She’s grown up in a world where she constantly watches her back and where trust doesn’t come easily. Quick to anger, impatient, pragmatic and deadly, not to mention DEAD, she at first appears quite intimidating to Ward. Scratch that. She’s intimidating the entire way through. Though she’s definitely abrasive, the fact that Card alternates perspective between Ward and Celia, letting us see the story through both of their eyes, gives the reader a front row seat to Celia’s thoughts – her vulnerabilities and weaknesses she’d never let Ward see – and lends her a much more human side.

Though all the aspects of this story are very well done, the interactions between Ward and Celia are the highlight of this book for me. Snarky, funny, witty, intelligent – it’s fun to watch these two characters antagonize each other as they partner up to bring Celia’s killer to justice. Watching their alliance morph into something…else, the issues of trust that they both struggle with and the influence they have on each other’s character development are very fun to watch as the book progresses.

The world Card places these two characters into is fascinating. The story largely takes place within the walled city of Brawenal. Divided into rings by a system of walls, each ring indicates a certain social strata. From there the society just gets more interesting.  I mean, a society  where necromancy is acceptable, but surgery is illegal has got to be interesting, right? There is a thriving criminal underworld ruled by the Dominus, a guild of assassins, and a justice system that uses seers to determine guilt or innocence.  The off-handed mentions of provinces and locations outside the city.  An ancient culture shrouded in mystery and a religion that permeates all aspects of life, presided over by the Goddess and her two sons – one light and one dark. It’s really a well-defined, well-crafted world and I wanted to know more about it and how it worked the further the book progressed.

Overall, Ward Against Death was a clever, thrilling urban fantasy, with page-turning mystery and captivating characters. This was a fantastic debut and I can’t wait to see what happens next in Ward and Celia’s story!

* Due to some mature content that may not be appropriate for young teens, I’d  recommend this as an upper teen/cross-over novel. 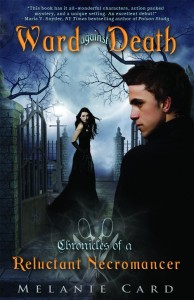